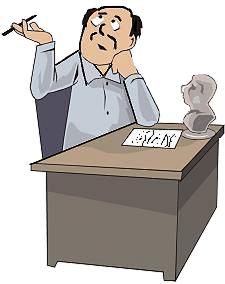 I didn't get the continuation.

In a fairly simple scene like New Beginning 140 (scroll down), there are a limited number of ways to go for the twist. A guy's been tossed into a disgusting room where there's at least one bad guy, who attacks him. The key to writing a continuation is to determine what we don't know. It would be amusing, if we didn't know what this room was, to have it turn out to be the detention hall at a junior high school. Or coach class on a Trans Air flight. But the opening author inconsiderately screwed those ideas up. Instead of just saying, As the iron-braced door slammed shut... the author wrote, As the cell's iron-braced door slammed shut. Nice going. So it's a cell.

If the person being tossed in the room were anonymous, the gag could be that it turns out to be Mark Foley. But we know his name is Telrik.

One thing we don't know is who this other guy in the cell is. Maybe it turns out to be Gollum. We also don't know why Telrik's being tossed into the most disgusting cell imaginable. The gag would have to be that his crime, though ridiculously trivial, is seen by authorities as right up there with orphanage burning. Yes, it would be nice if that crime were suggested by something earlier in the piece, but seldom does everything work out so perfectly.

Once you have your twist, it's just a matter of writing it into the story, while assuming the original author's tone.

There are a few openings posted at Evil Editor's Openings waiting for you to try your hand at writing a continuation. If writing Guess the Plots is more to your liking, visit Evil Editor's Gallimaufry. Openings may be emailed to EE.

Of course the main point of this post is that the volume of continuation submissions is falling, and we need some new blood. The volume of openings is also dwindling. Not good; the continuation authors need material to work with. We'll happily take your opening, even if it's from a book for which we've already done the query letter.
Posted by Evil Editor at 11:45 AM

am sure i seem completely ignorant (or will once u read this) but why are you evil?

Because he gets away with making smart-ass cracks about plumbers on the planet Uranus.

All editors are evil, EE is just the king of Evil on top of it.

BTW, if you don't get more submissions in soon, I warn y'all I'll send a bunch of my really bad ones in--the ones I haven't even looked at in ten years. I mean it. And I'll send them in as anonymous.

But, writtenwyrdd, you just warned us that you'll be sending them in. So, as soon as we see 'anonymous' we'll know they are yours... Even if they aren't.

Oh, and EE is definitely Evil, for he causes serious nose burns.