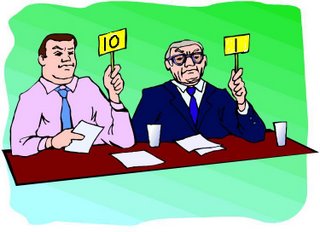 And so while posing as the leader of the French Revolution, the agent secretly dashed off hundreds of form letter rejections, crushing the hopes of wannabe writers across the continent. Until he was crushed by the foot of a giant eunuch.


comment 1, by Hawkowl: I knew after the first character of the first word that this was the worst example of writing I've ever seen. Way too predictable. This writer will never warrant any attention.

comment 2 by Egghead: The only way this could work is to be in present tense, third person POV.

comment 3 by Dave: Too many words. Eliminate every "the." And we get the point after the first sentence. Cut the other garbage.

comment 4 by Rammer: The only way this could work is to be in past tense, first person POV.

comment 5 by White Mouse: The author doesn't know where to start the story. Where's the tension? Where's the conflict? Isn't there a car chase that would make a better starting point?

comment 6 by radicalfeministpoet: Damn surgeons, they should all be killed.

comment 7 by Bunny Girl: Way too much description. Just show me already!

comment 9 by Kate Thornton: Great continuation. The continuation was great. Did I mention that it was a pretty good continuation?
Posted by Evil Editor at 10:07 AM

What, I'm not worth taking the piss out of?

That sums up the whole blog in one post. Bravo.

Excellent opening, but not thrilled with the continuation.

This one needed a beverage alert. I laughed, I cried. At the same time.

Hawaiian punch out the nose. What a riot!

But you forgot to point out the pitiful grammar. That is one retardedly lengthy run-on sentence, and all the comma-splices in the universe don't fool anyone.

(Waving hand madly) I'd read it anyways!
(Course we all know I'll read anything, anytime)

I love you, EE. May I have your children? Lots of them?

Yeah, Chuck. So what's your point? Where are we? When are we? Am I supposed to care about something or someone? Aaaaauuuggghhh!!!!

You've got way with words, though, so I'm moving on to the next chapter to see if anything happens there.

This looks like it has potential to be a literary classic, but the author uses vowels way too much.

Laughed until my sides ached. Too funny!

Come off it, hawkowl, I only had to go as far as Face Lift 220 to find you commenting on a writer.

Go away for a couple weeks vacation and be forgotten.

Wow! EE knows his minions well LOL! Nailed Hawkowl so authentically I started to think those were real comments. The statement of opinion as though it is fact was dead on. Could have gone on with some obscure facts in Dave's post, though, but that was right on also. Overall, bravo!

The post was submitted as a comment to the Old Beginnings Sources. Knowing no one would see it there, I posted it up front; thus your praise (and the honor of fathering your children) belongs not to EE. Perhaps the author will come forward.

If there are regular commenters the poster failed to include, feel free to send additions to the list, and I'll insert the better ones.

Evil Editor, pass me some of that Scotch.

OMG, this is hysterical, especially Hawkowl's and Dave's comments. Poor Dave. Poor Hawkowl. Oh, Dave, you must be in stitches.

We fill Evil Editor's life with love and laughter. Another wee dram of Scotch please.

Aw for Halloween you need something scarier than Dickens.

LOL, this was great! (So glad not to see my name up there). Dave's entry wasn't complete, though. He didn't offer a total rewrite...

I didn't read the comments. :o\

So Evil Editor didn't write this. He doesn't think we're all froo-froo bunny slippers and a hot toddy.

Back to the chardonney for me.

Oh my - I get back from a day at the Symphony and I find - teasing, abuse, jokes at my expense...

I'm crushed, crushed I say, heartbroken, tearful, saddened. What apapthy accompanies that entry. it's It's, It's just

so funny! I'll be giggling for hours.

Now I read all these comments, you guys are SO MEAN...
I might whimper to my doggie all night
{winkie}{winkie}

It was me, I submitted that one last night. I hope nobody was offended. I meant to add a goofy comment attributed to myself but I forgot.

I also had a few other comments from a few other regular minions but I thought Evil might run out of patience...

Buffysquirrel - You're right. And she totally deserved that, too. LOL Still, you care enough about what I write to go searching back through the comments to see if I've actually criticized a person rather than his/her writing. See how powerful I am? Mwahahahahaha! Dance, puppet, dance!

Admit it. You'd buy my book just to prove to yourself that I can't write. Hehehehehe... :)

We love you, Dave. You're a generous writer.

Dave, I'd remove one {winkie} from your comment. We got it with the first one. ;)

I wanted to add a joke about myself, because, well, I like making fun of myself and it's all about me, me, me, but the only thing I could think of which is consistent is that I write too much in a single comment.

However, Gutterball has spewn Hawaiian punch out the nose twice now, which makes me wonder how much of the big red pitcher guy she drinks. Next time we need to tease the minions, Gutterball, your tag is all ready to go.

I'm glad the teasing was taken well by all, even though I had nothing to do with it. I bet we are the first ever Blindside-loving coffee-spewing zombie eunuch evil critique group.

Comment 2: Move the blindside-reference to the top. The rest of it doesn't move the comment along in the least. Who's the MC?!!

Comment 3: I would normally spew here, but this comment was not worthy of any such thing. Mild smile at best.

Comment 5: I love how comment one thinks he know so much about writing comments and then confuses "its" for "it's" and "utter" for "udder". Get a life, Comment 1er!

Comment 6: This is the author. Thank you so much for the comments on my comment. They are so helpful. I'm off to incorporate every single one of them into my updated comment that I will be submitting to the blog at 2:00 AM when I can't sleep. Especially comment number one that says the whole thing is crap. That is soooo helpful!

Comment 7: I liked where this comment was going, but can you change the name Gutterball to something else? It makes me think of Thanksgiving. I don't think you want me imagining your heroine as a turkey throughout the whole thing.

Comment 8: Author, I think gutterball is a fine name. It's clearly a reference to bowling. I don't know where Comment 7 came up with turkeys. Butterball/gutterball... pretty remote connection. Keep it.

Comment 9: Can I just say that this is the first time I've commented on here?

Comment 10: Comment 9 person, that's not even an Evil Editor joke; that's an old Monty Python reference that no one is going to get. If you are going to write a comment this long, author, you need far better material.

Comment 11: I think some people will like this comment, but comments aren't really my thing. Well, at least not ones as self-referential as this. I'd rather yank my toenails out than read the next paragraph, but good luck to you!

There, I'm dead. Are you happy now? You have your very own zombie! Just in time for Hallowe'en, too.

Wow, this is cool. I'm a newbie to this. Could any you tell me how to leave my own comment?

I think you've figured it out.

Marry me, Pacatrue! Either that, or come over here and wipe the tea off my keyboard and monitor!

Author, own up to this and take a bow.

Okay, I felt this opening had way too little description and the author should just tell...

Seriously, that is too awesome. I don't know who anon is, but they've got my number. Take a bow, author!

Everytime I hear that quoted I want to start shouting, "It was a dark and stormy night" at the top of my lungs just to drown it out, cuz it sounds like an entry to the Edward Bulwer-Lytton bad writing contest (www.bulwer-lytton.com)

Next time we need to tease the minions, Gutterball, your tag is all ready to go.

Pacatrue, you kill me. Absolutely not! *laughs* I'm too much a newbie to have a tag, darn it!

...And Hawaiian punch is GOOD. I made myself stop drinking Coke (and pop in general, actually), so I have to have something bad for me. But it does burn when it comes out the nose. Oi.

No, hawkowl, just enough to go looking through for the author-criticism I knew would be there :).

As for buying your book, buying books, I'm supposed to BUY books? I thought these days people put their first chapter up on the web for me to get a free la--er, look.

Oh, and do you really consider 6 foot six inches and six millimeters a giant? That makes Eunuch sad...

I love "Dave" telling Charles Dickens to "cut the other garbage".

I'm pretty sure this was Evil Editor's own work. Who else knows the minions so well. Evil, quit being so modest!

EE is anything but modest.

He is, after all, an editor.

The only way this should work is in future tense, second person POV.