Due to a few complaints about captchas not working properly, I've removed the captcha feature from comment modification. I would have done this sooner, but I was unfamiliar with the term "captcha," and assumed the complaints were coming from inebriated spambots.

I've now done some research on the topic, and to save my minions from having to do the same, shall summarize what I've learned.

Captcha (short for Captain Chaos) is a test you must perform in order to convince a computer that you are not a computer. For instance, say it's yesterday and you wish to comment on one of Evil Editor's blog posts. You type out a lengthy comment which is sure to entertain and enlighten the Evil Minions. In order to publish the comment, you must, of course, get it past Evil Editor’s Evil Eye™, but first you must pass the captcha test, in which a series of letters are displayed, and you must type them. Failure to correctly reproduce the series of letters is evidence that you aren't a human, and we don't want you here.

The earliest captchas were easy to read. It was believed that computers couldn't actually read or write, and thus would be unable to reproduce a string of letters such as:

Turned out computers wanted to comment on Evil Editor's blog so badly that they evolved the ability to read and write.

But humans are nothing if not clever to a fault, and came up with the idea of distorting the string of letters:

The idea was to make it so the computer couldn't read the letters. But a lot of humans couldn't tell the difference between a lower-case n and a lower case r, an issue that didn't seem to bother the computers, who were able to use their "undo" function to undistort the string of letters. So while humans were thinking, Shit, that must have been an r, I'll have to try again, computers were thinking, Aha, it's an r. The humans will never get it.

Humans are nothing if not persistent, so they came up with the idea of putting the letters really close together:

But finding the perfect size that would fool computers and not send humans to the opthamologist proved impossible.

Next came the idea of a squiggle through the distorted letters:

Humans thought, Is that an l or a t?
Computers thought, Humans are so cute.

What programmers had yet to realize was that computers enjoy solving puzzles, and humans don't. That New York Times crossword puzzle you couldn't get half through? A computer could do it in a billionth of a second.

But humans are nothing if not stubborn, so you can expect to see a new generation of captchas soon: 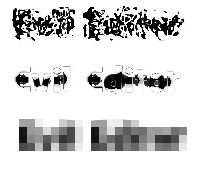 Seems we'll do anything to keep computers out of our computers.
Posted by Evil Editor at 8:04 AM

Thank you. Hope the spam doesn't get intolerable.

As an inebriated spambot, I applaud this decision.

What an interesting post! Please check out my site!

I knew that AlaskaRavenclaw was a troublemaker.

I have been trained to sniff out the phrases EVIL, SORCERER and KNOB CHEESE, but appear to have become lost in the architecture of your site.

If you would be so kind as to direct me to a comments trail where any of these terms reside, I'd be more than happy to upload links to a selection of Nigerian scam sites directly to all your internet-enabled devices and arrange for teen strippers to abseil past your bedroom window 24/7.

PS: If you would like to consider my manuscript, I'll throw in an offer for nylon underwear guaranteed not to fit.