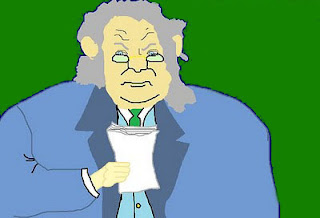 Happy Memorial Day. We don't get as big a crowd on holidays, so I'm going with another query featuring a book that's in print, even though the author didn't bother to inform us, and probably didn't even dedicate the book to us.

I'm starting to think half the authors who send their queries here ultimately get their books published. The title is Devil's Gold. The book was nominated for Best Romantic Suspense of 2009 by the Romantic Times Book Review.

1. Bert Blott knows that the shiny stuff on the wall of Mr. Popek's garden wall is really just fool's gold. But when he finds a bar of real gold in the same garden, he is delighted--until the owner shows up.

2. The Prince of the Underworld has no need for earthly riches - until he meets the American Princess from Hell.

3. Spinster detective Amelia Pettipants is back to solve another case. This time, when the Vicar drops dead at the village cake baking contest, the secret ingredient in the devil's food cake entries makes the recipes pure gold.

4. Deep in the Yukon, part-time prospector Dave Mercey strikes what he thinks is the motherlode. But when the men working the mine start turning into flesh-eating zombies he realizes that some things are better left underground.

5. Glen made a deal with the Devil: His soul for Olympic Gold. He's won his four races and is hailed as the "fastest man in the world," but now he wants out of the bargain.

6. An oil company discovers a bottomless well of "black gold," and conspires to commit genocide in order to ensure no one else "horns" in on their find.

Devil's Gold is a completed 117,000 word commercial novel that I would like to offer you for consideration of representation. [End the sentence after "novel," or say "for which I'm seeking representation." You don't want the agent thinking the book is as wordy as that sentence.]

The biggest gold rush of the twenty-first century…some call it terrorism, others call it survival. [I don't know what that means. How is terrorism or survival a gold rush?] Endless burning gas flares, rivers poisoned by oil, bloodbaths inflicted by corrupt Nigerian militia -- this is zoologist Cassidy Lowell's fight. [This sounds like a fight for Red Adair, Greenpeace, and the United Nations, but if they've already failed, it is time to call in Cassidy Lowell.] From the heart of the Niger Delta to the serene ambiance of Yellowstone National Park, Lowell along with undercover agent Jake Anderson, [He's an undercover agent for what organization?] race against time to prevent New World Petroleum from committing genocide and stealing a bottomless source of oil. [You toss around terms like "endless" and "bottomless" pretty freely. Stealing a bottomless source of oil would be tricky. It would require an endless supply of bottomless oil tankers.]

Chastised for not cooperating with the oil industry, Cassidy is reassigned to the serene ambiance of Yellowstone National Park. [Chastised? Are you saying her transfer from Nigeria to Yellowstone is a punishment? That's like a soldier stationed in Afghanistan talking back to his sergeant, and getting shipped to Hawaii as his punishment.] Jake is selected as her biologist for this assignment. [Selected by whom?] His mission is to determine the nature of the menacing connection between Cassidy's employer, ZEBRA (Zoological Ecological Biological Research Agency) [Actually, zoological would be a subset of biological, so you should replace biological with botanical. You still get to call it ZEBRA.] and New World Petroleum. [And he's going to determine this in Yellowstone?]

Discovering an alarming genetic mutation of the parvo virus [parvovirus--one word] that appears to transfer from canine to human, [I smell a werewolf book here.] Cassidy and Jake pursue its origin before it spreads beyond the greater Yellowstone region, [They discover this genetic mutation? Don't they alert the Center for Disease Control? Or at least ZEBRA? Aren't these organizations better equipped to find the origin than Cassidy and Jake (who's an undercover agent, not even a real biologist?)] [Yellowstone Park is bigger than Rhode Island and Delaware combined, and the greater Yellowstone region is several times that. Two people are going to keep the virus from spreading beyond this region? Let's face it, we're doomed. Doomed, I tell you.] their relationship taking a slight detour from professional to personal. [If Jake doesn't become a werewolf at some point, you've missed a golden opportunity.] The media strikes at Cassidy, accusing her of transferring a biological weapon from the Niger Delta to Yellowstone. [Someone in Montana gets parvovirus, and the media immediately decide it was brought from Nigeria by Cassidy?] She's been set-up by New World Petroleum who is preparing to release the mutated virus on a vast scale and commit genocide within the Niger Delta, opening the door for unmonitored mass production of oil pushing New World Petroleum to the forefront as the most powerful oil conglomerate in the world. [If they commit genocide, who's gonna do all the labor involved in pumping the oil? Wait, they can import slaves.]

Cassidy and Jake arrive off the coast of West Africa to uncover what is driving New World Petroleum's actions, salvage her career and protect the Niger Delta region from more environmental damage. Cassidy is betrayed by one of her own [Her own what?] and infected with the virus. Jake undertakes a successful search and destroy mission, bringing down New World Petroleum and saving the woman who now ranks No. 1 on his "most important" list. [Is this a romance?] [One guy brings down New World Petroleum? That's as believable as a cow destroying the city of Chicago.] [How does he save Cassidy from the virus? New World Petroleum was using the virus to commit genocide, yet Jake can cure it?]

I have previously been represented by Madame X of The YZ Literary Agency. Ms. X submitted this manuscript to MIRA. [Mira Books? Or Mira Sorvino?] In addition, the movie rights were optioned through July of 2006 and garnered interest from George Lopez [George Lopez? Too bad it wasn't George Lucas.] in conjunction with Clint Eastwood. The script was also submitted to Bruce Willis in June of 2005 [With all this name dropping, I'm beginning to think it was Mira Sorvino.] where it met with favorable interest but ultimately there was concern that the locale was too similar to Mr. Willis' Tears of the Sun. [More likely there was concern that the box office gross would be too similar to that of Tears of the Sun.] As far as I know, the script has not been returned or officially rejected. [Apparently film producers are just as slack as publishers about sending out rejection slips.]

Thank you for your time and consideration of this query.

When zoologist Cassidy Lowell's work in Nigeria comes into conflict with the interests of New World Petroleum, she is transferred to Yellowstone National Park. There, working with biologist Jake Anderson, she discovers an alarming genetic mutation of parvovirus that transfers from canine to human. The virus appears to have originated in Nigeria, and Cassidy is accused in the media of bringing it to the US.

She's been set-up by New World Petroleum who are preparing to release the mutated virus on a vast scale and commit genocide within the Niger Delta, opening the door for unmonitored production from newly discovered oil fields, and making New World the most powerful oil conglomerate in the world. Jake reveals that he's actually an undercover CIA agent, assigned to investigate the connection between Cassidy's employer, ZEBRA (Zoological Ecological Bio-Research Agency) and New World Petroleum.

Cassidy and Jake arrive off the coast of West Africa seeking to salvage her career and protect the Niger Delta region from environmental catastrophe. When Cassidy is infected with the virus, Jake has only a few days to sabotage New World Petroleum's operations and to save the woman he has come to love.

Devil's Gold is a completed 117,000 word commercial novel. I would be delighted to provide the full manuscript or a partial and synopsis. Thank you for your time and consideration.

I didn't see mentioning Bruce Willis as a selling point. Publish my book because Bruce Willis doesn't want to star in the movie?

The screenplay will be about 120 pages, while the novel will be more like 400. That means you have to fill in all the glaring plot holes that will exist in the ridiculous summer blockbuster.

My plot probably isn't quite yours, but it might give you a blueprint for a more cohesive query.
Posted by Evil Editor at 6:37 AM

Not only do your alumni get published, they nominated for stuff too.

And not even a box of cookies for the man who set them on their path?

When Joni Mitchell recorded "Blue", everyone thought she was laying down a bunch of feely-hearty goodstuff pertinent to the post-60s 70s.

Personally, I believe she was a precog, offering up to all and sundry a vision of the future spectacular in its unsentimental ruthlessness.

Once I'm rich and famous, EE, I wont forget you - promise!

Even when universities are throwing honorary degrees my way and the Nobel committees are begging me to accept a prize or two, I'll even drop by your blog once a year or so - twice if I'm in a generous mood. ;)

What the what??? I can't imagine submitting a query, getting great feedback and corrections on it, and then not following up. RUDE!

On that note, EE...feel free to repubb either of mine here. Dream War (currently the 14th rated novel on Kindle's Sci Fi list) or Ghosts of Rosewood Asylum (due out next month) which I hope to have (if the price doesn't rise too high) as the EE Book Chat for Aug!

Wow! EE you really do make a difference!