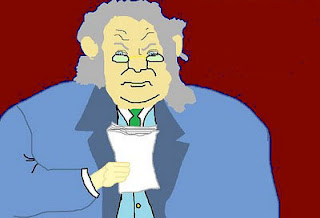 This query was purport- edly from an author who was familiar with the story of an unethical priest. But this blog post would seem to show that the query came from the unethical priest himself. In any case, the book has been published.

1. When little Tommy Mupler named his dog "Snitch" he didn't know the dog could talk. Now Susie next door is too embarrassed to go to school, Tommy's mother is on the warpath . . . and Snitch is in the doghouse.

2. After inmate Roy Smith admits in confession that he murdered someone, he warns the priest not to blab. Will the good Father keep quiet, or will he snitch . . . in order to reduce his own sentence?

3. Ratso Rizzo had a life before Midnight Cowboy. He's on the police payroll and the Family has found out.

4. Herbert Koober wants to be a cop, but he doesn't meet the height requirements. He does, however, have big ears and a big mouth.

5. A would-be young witch juggles middle school with the Middle Ages as she tries to find a spell to keep her from blurting out her best friends' secrets.

6. A reporter goes undercover at a maximum-security prison to try to befriend the inmates and pry out their secrets . . . and grabs the scoop of the century.

SNITCH: a nasty word. [Although not as nasty as "snatch."] So what does it have to do with an Old Catholic priest, the pastor of a California church? He sells his parsonage and buys a $102,000 dollar black BMW. He’s also married to one woman and engaged to another. When the authorities catch on to his money-laundering and pandering, our good priest [Good priest? Oh, you mean compared to all the other priests we've been reading about.] is arrested and tossed into jail. His life will change forever when he meets Roy G. Smith, twice convicted, high-risk pedophile presently being held for murder in one of California’s highest profile cases. [The pedophile isn't the priest? Nice twist.]

Week 1: There was this woman. She was 45.
Week 2: She's dead.
Week 3: Got any smokes?
Week 4: They found her with multiple stab wounds.
Week 5: What is it with the cooks in this place? Everything's too salty.
Week 6: I mean seriously, salt in fruit cocktail?
Week 7: You don't think I had anything to do with it?
Week 8: I see no way a wolf could blow down a house made of sticks.
Week 9: Okay, okay, I killed her. But she had it coming.]

When Roy realizes he has divulged too much, he warns the priest to keep the information on the low down – or else. [Week 10: By the way, that was all off the record.] Will the priest snitch, thus reducing his own sentence, or will he quietly go on with his jail time, and live with the knowledge of the murder, a weight on his mind which will eat away at him like a maggot feasting on garbage? [That's the kind of simile you use when you're mocking writers who use too many similes.]

The reader will explore the very timely topics of priesthood, jail (a prismatic subculture) [I think you mean a cultural prism.] and murder within a cocoon of murderers, [Huh?] chomos (child molesters) [Why isn't that chimos? Just asking.], homosexual prostitutes [promos)], [arson within a termite mound of] arsonists, supreme white power dudes (Pure Boys, Nazi-Low Riders, Nor-Cal Woods), [Are you under the impression that the stuff inside all these parentheses is making this more clear?] paranoid schizophrenics, and gang-bangers (Nortenos, Sorenos, Crips and Bloods). [Lists tend to get boring the longer they go on. Especially when most of the items being listed need explanations. It would be more interesting to choose a couple of the more important items on the list and elaborate on them.]

Snitch is a non-fiction, [Nonfiction? Why didn't you say so earlier? I wouldn't have mocked it for being preposterous if I'd known it was true.] true-crime memoir written by the author of The Sound of Meat, [The sequel to The Sound of Music, in which the von Trapp family all have jobs frying bacon.] an e-book published by Cool Publications of Great Britain, and the essay, Snitch, soon to be published by Hillary Carlip on Fresh Yarn. [The cool thing about publishing on fresh yarn is that after the reader is finished reading, she can knit a sweater. I'm not sure it's important that the yarn be fresh, actually.] At your request, I will send you a writing sample and a book proposal. [I thought this was a book proposal.] Please feel free to contact me at the address below.

It sounded like an interesting story when I thought it was a novel. I think you need to scrap it and come at it from a new angle, one that points out that it's the true story of whoever, and why his story is so interesting. Or make it a novel.
Posted by Evil Editor at 9:15 AM

Holy carp. These Classics are revealing some hellacious real-life stories. Forget the books!

The author actually got this one published:

Has a second book too in the same vein.

I'll be DARNED. I wouldn't have read that novel but I am FASCINATED that it's essentially a shameless tell-all.

Wow. This is something else entirely. So is that other version of the query- one of those "this may be the greatest book of all time" queries. Talk about bombast. Is this guy full of himself or what?

Wow. This is fascinating!

And the product description makes for a damned good query. Wonder who wrote it?

Huh. Appears to be a real publisher, too.

Btw, in my experience you don't have to go to prison to listen to people natter on at you about murders they've committed. You can go to Anchorage instead.