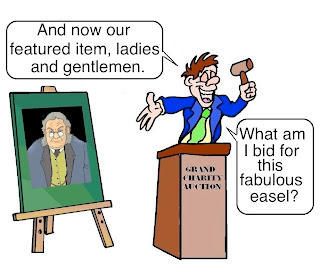 If you're a bargain hunter, there's not much that hasn't been picked over, but you can find a few items at a good price. I noticed that several copies of a book called Kiyo's Story are available in hardback (free shipping); it's in the nonfiction section under "For Readers" and currently the high bid on some copies is $2.00. I saw a few other $2.00 books as well. If you're not so interested in bargains, it's a good cause, so place a bid on something. Even if you don't get it, you'll force someone else to donate more.

Evil Editor editing your entire novel has averaged over $2000 the last four years, and looks like it's going to be a bargain this year (although I did see one evaluation of a proposal shoot up from $850 to $2050 in its last hour last night, so you never know).
Posted by Evil Editor at 4:46 PM

Falcondraco wanted the Aug book chat $15 more than I could go.
:-(

Wonder if we could work something out for my book for Sept or Oct (Halloween might be a great time for a ghost story...)

Ignoring the possibility that Falcondraco might not appreciate knowing that the person whose bidding forced him/her to pay so much is getting the same thing for free, there's also the fact that we could fill all twelve months with books published by the minions. I prefer to choose books or authors that have been nominated for awards so that all published minions are equally disappointed. And so if a book is a clunker I can blame the Nobel committee instead of shouldering the blame myself.

Yeah, I think we need to have words with the people awarding these awards.

Understood. But just as an FYI, I wasn't trying to get anything for free. Keep in mind that when I say "work something out" that I hail from Chicago.

As for the book chats, the "personal connection" might make for more participation. I'll likely participate in the Aug one (least I could do is purchase Falcondraco's novel for having bid up the cost).

As for the writing awards and accolades, I don't hold much stock in them. My hunch is that they're mostly political and influenced heavily by pressure from particular large publishers. I mean c'mon...Dan Brown's last clunker was a starred Publisher Weekly novel.

Three of the best (non genre) novels/books I've read in years didn't win many awards: Devil in the White City (Edgar Award a year after publication), Water for Elephants, The Art of Racing in the Rain. If the awards were valid, those should have taken down a boatload of them. Just sayin'...