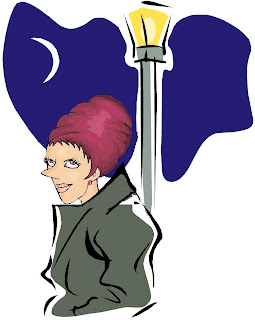 Lily of the Lamplight

1. Lily the Moth's affection for Rupert, the lightbulb who hangs out over the porch, is red hot, but it quickly flames out.

2. Everyone in town knows that the ghost of Lily Lawrence lurks by the streetlight near Shady Acres Cemetery. Jaden and Mike have rounded up cameras and recorders. They're going to prove Lily is real . . . or die trying.

3. Oliver uses his sexy neighbor Lily as the model for a character in the video game he's designing. When Lily disappears, Oliver is suspected of murdering her. If only he'd used his other neighbor, Zelda.

4. When 17-year-old Steve gets into botany and turns the basement into an ultraviolet growing chamber, his mother has mixed feelings. It's great that he's taken an interest in science, but this obsession with horticulture? Won't his classmates tease him? Yet suddenly he's Mr. Popular.

5. Lily Maury spends her retirement collecting antique lamps and reflecting on the past that wasn't, while her family plots to get rid of the junk and dump her in an elderly care facility.

6. Growing up over her parent's pub might look like fun to the other kids, but Lily's room is right over the loo and she's sick of listening to people puke. She embarks on a campaign to turn the Lamplight into the first alcohol-free pub in Britain.

I would love for you to consider my 60,000 word YA suspense novel, Lily of the Lamplight.

Oliver believes he’s about to have the best summer of his life. He’s graduated from high school, working as a video game tester, and living in downtown Seattle with his best friend, Max. [Not to nitpick, but "He's" is short for "He has" in this sentence. If you change "graduated from" to "finished with," it would be "He is," which works with "working" and "living." Or you can keep "He's graduated from" but change the rest to "gotten a job testing video games and moved to downtown," so everything works with "He has." Or do nothing and assume no one cares.] He and Max are designing a video game that must be finished by the end of the summer in order to gain acceptance to an elite gaming academy [The last thing you want is to settle for a lower-class gaming academy where they teach you to program Pong.] in Seattle, and thus, live the dream of spending their entire lives with an XBOX control in their hands. [Good plan. I remember when I was living the dream of spending my entire life with an Atari control in my hands. How'd that work out?]

But, Oliver makes the dual mistake of using his beautiful neighbor as model for his kick-ass cyber heroine and falling in love with her. After she goes missing, he discovers real women are far more dangerous than virtual ones when he finds himself the number one suspect in her death. [How long has she been missing? How do they know she's dead? And who are these real women who are dangerous?]

I worked in video games both as a freelance writer for Nintendo Power Magazine [I've never forgiven Nintendo Power for not rating The Lost Vikings as the best game ever.] and as a video game tester. This is my first novel.

You might want to mention that the neighbor's name is Lily (if it is).

This is all set-up. Here's my character, here's his situation. But what actually happens? Do they find a body? What evidence do they have against Oliver? Are there other suspects? Has Lily magically disappeared into the video game? What's Oliver doing to clear his name? Is there a bad guy? Is Oliver in danger? Where's the suspense?

The good news is it doesn't seem to be based on a video game or on your most recent game of Dungeons and Dragons.
Posted by Evil Editor at 9:01 AM

On the not-so-good side, you don't tell us what actually happens in the story. On the positive side, it does make me want to find out.

Is this a real-life murder mystery (socially inept gaming whiz is forced to interact with the offline world when tragedy strikes)? Or is it a sci-fi thriller (a programmer's obsession with a girl makes the girl vanish into cyberspace, requiring gaming skills to save her)?

Who's Lily and what's the Lamplight?

Little things like that we want to know. Before requesting partials.

Also, "Oliver" strikes me as too much of a preppy name for a hardcore gamer; wouldn't he at least go by Ollie or something?

EE: "Not to nitpick, but..." has got to be the most quintessentially editorial saying I've ever seen.

1] Why give Microsoft all that free advertising? This isn't product placement they paid for, like in the movies.

2] It dooms your novel to sound old school and creaky as soon as that hot gadget becomes so yesterday, which is too likely to be what, one year? It takes that long to find an agent.

What to do? It's fiction. Follow Jules Verne's example: Invent your own imaginary super gadgets.

The title needn't be explained in a query, as it could have little to do with the plot (In this case it's a song). You wouldn't waste space when querying The Catcher in the Rye or The Silence of the Lambs explaining why it's called that. However, if you're mentioning the neighbor, and the neighbor is Lily, you may as well call her that.

Oliver believes he’s about to have the best summer of his life. Since graduating from high school, he has found work as a video game tester and now lives in busy downtown Seattle.

He makes the mistake of using his beautiful neighbor Lily as a model for his kick-ass(killer?) cyber heroine, and falls in love with her in the process. After she (turns up dead?), he discovers real women can be far more troublesome than virtual ones--he finds himself the number one suspect in her death.

The plot reminds me of that scene where a guy's immobilized and he spies on his neighbor, and then he sees she's in danger and tries to rescue her...What's that from? I think I saw the Simpsons make fun of it but I can't quite remember the original.

Uh-oh. Looks like a lot of people just skipped over my post because I was rambling about nothing. Well then...

If you wanted to make it timeless, you could change it from Xbox to game controller--However, we live in an age of name recognition and it's not inconceivable to think that the name Xbox might live as long as the company Microsoft (we've already had Xbox, Xbox360, PS1, PS2, PS3...).

Can you really design a game from home or are these guys given access to campus resources? I suppose that's not essential to the query--I'm just curious.

EE's GTP#3 was the funniest.

Rear Window is the movie (more recently re-imagined in Disturbia). Though it's not clear this is anything similar.

Ah, so it was Rear Window. Thanks EE, that was bugging me.

I didn't see Disturbia because I have a self imposed rule of one Shia LaBeouf movie per nine months.

Name recognition, yeah, it can be lucrative. That's one reason the savvy Rowling is so rich -- she gets $$ by licensing use of her names etc for products inspired by formerly imaginary [magic] gadgets. Some authors always use existing products & brand names so this kind of revenue will never be theirs.

Option 2 is especially common for Romance because publishers expect those books to have a brief shelf life anyway and want to appeal to people who watch a lot of TV and are brand obsessed.

As you ponder this choice for techno / scifi stories, you could go read Crichton's CONGO and pay special attention to his use of the [now hilariously primitive] IBM/DOS computers.

So, author, maybe change the system and game names, but I think this sounds like a good read, and I like your title a lot.

Goods luck with your novel!

I definitely want to know what happens next, but I feel like you need just one more sentence to tell us how Oliver is going to tackle the problem.

Also, you mention Seattle twice in consecutive sentences. I would take out one of those.

I think the story sounds great! I definitely want to know more.

one thought on this sentence:
"He and Max are designing a video game that must be finished by the end of the summer in order to gain acceptance to an elite gaming academy"

Personally, I think it would read better to say "that they must finish" otherwise it kind of souds like the video game would gain acceptance to the elite academy, rather than the boys. JMHO!

Thank you so much for the feedback. I'll definitely add some sentences to explain more of the plot. I was trying not to give too much away, but it sounds like I need to.

It's more like Laura, than Rear Window, but if Laura were evil - in this case, it's Lily who's evil, but we don't find out till the very end, when poor Oliver is in soooo much trouble.

I'll consider the XBOX references. I did want to set this very specifically in a video game test lab, right now, so I'm not sure it would help the book to make that more generic, but I'll consider it.

And I loved the nitpick comments. I completely missed the He's issue, and wouldn't want to let that stand.

PS While you can't design Halo from home, you can design short game levels, or games that use flash. Oliver's the animator, so he's mostly modeling Lily in Maya.

Good title.
Great set up.
Where's the plot? I don't think we even need a lot here, just one more paragraph, and I think you've got it.

Also, I don't think there's a really big problem using XBOX, Nintendo, or PS[insert your favorite number here] as the gaming systems. Those three brands aren't going anywhere anytime soon. I mean Atari is gone, so is Sega (how I do miss when Sega games actually sang "Segaaaaaah" when the started), but The Big Three are mainstays.

The thing about the title is that you're going to have a couple people picking it off the shelves thinking it's about WWII, even if you did spell her name "Lily" instead of "Lili." Are you paying homage to the song?

My issue with the query was the line, "he discovers real women are far more dangerous than virtual ones." While your comment explains why this is true (Lily is evil), the query doesn't. When I read it, my reaction was: so Oliver blames Lily for her own abduction?

I think for the "dangerous woman" line to work, we need to know that Lily herself is causing the danger. As it reads now, the danger seems to come from the police/people investigating Lily's disappearance.