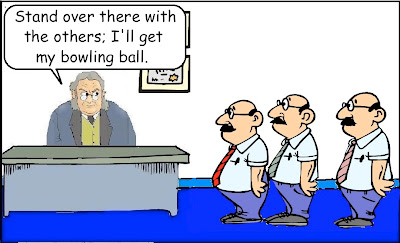 Your caption on the next cartoon! Link in sidebar.
Posted by Evil Editor at 7:00 AM

I'm not sure I get it. Maybe I haven't been reading this site long enough.

See, the guys have body shapes similar to bowling pins. But there are only three, and you need ten for bowling, hence the "others."

I was once at a bowling alley on Halloween and it was the first time the manager agreed to an alcoholic punch for one league (normally they only let beer on the concourse). Well, that league got so drunk that they couldn't hold the bowling balls and when they'd get up to bowl, the balls would slip backward and into the rest of the league (well lubricated). The dance of avoidance was funny to watch until a ball went down the concourse and a witch chased the manager (my father) into the mens room and banged on the door with her cane. A pumpkin lady (orange in costume) slid ten feet down one lane on her chest and a couple bowling balls were lofted in attempts to get strikes. On another alley, the bowlers thought the approach sticky and used too much baby powder on the wood (not their shoes) and the approach became like ice. Rolling 16 pound bowling balls on ice-like wood is funny to look at but...

They never allowed alcoholic punch ever again. I was under the drinking age and didn't taste the punch. I was the manager's son and everyone reported my deeds to my Dad.

You mean people bowl without being drunk? Where I come from - intoxication is mandatory at the bowling alley (especially on family night) - costumes optional.

Beverage are not permitted in the pits because the alleys are wood and liquids causes damage. So the beer stayed on the concourse. These leagues were drinkers but not drunks.

This wasn't the first party in the lanes but it was the first that they allowed hard stuff. I was standing next to the General Manager (my Dad's boss) when he tasted the "punch" and I could smell the booze. It wasn't punch. It was a mixed drink with a fruit garnish. I was under age and knew better than to taste it.

The next week the woman in the witch mask who chased my Dad into the mens room had to face him. She was so embarrassed she almost crawled into the building.

I'd love to help you guys but your ties don't match and it's bugging me. --faceless minion