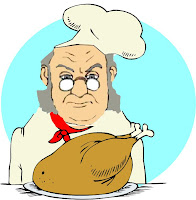 Below are descriptions of eight published cookbook/memoirs. Each has a somewhat amusing title. Your job is to come up with fake titles for any or all of them, to be used in a "Guess the Title" quiz.


1. From failure to fusilli, this deliciously hilarious read tells the story of the author's fizzled romances and the mouth-watering recipes she used to seduce her men, smooth over the lumps, and console herself when the relationships flamed out.

2. Nearing 30 and trapped in a dead-end secretarial job, the author resolved to reclaim her life by cooking, in the span of a single year, every one of the 524 recipes in Julia Child's legendary Mastering the Art of French Cooking.

4. A lyrical journey from Korea to New Orleans to Paris and Provence, along the way serving forth the author's favorite recipes.

5. Women from different centuries tell you about the meals of their time. You can learn about a meal that Anne Boleyn enjoyed at Hampton Court with Henry VIII, eat a meal with Emily Dickinson, and celebrate Passover with Emma Goldman.

6. An insightful, entertaining, scrupulously reported exploration of China's foodways and a swashbuckling memoir studded with recipes.

7. As the author delivers his recipes to us, he invites us to share his family’s age-old passion for the pig and to celebrate the long, delicious history between man and swine.

8. At the age of thirty–seven, the author left a lucrative career as a jeweler to become a chef. Instead of going back to school, or getting on–the–job training, he did it the hard way: he bought the restaurant and then taught himself to cook.
Posted by Evil Editor at 8:26 AM