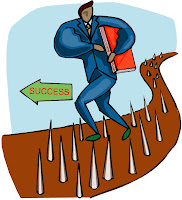 Some of you may recall that a couple years ago Miss Snark, Literary Agent, ran a crapometer with a limited number of entries, and that Evil Editor offered to post comments on some that weren't lucky enough to get onto Her Snarkness's blog. You may even recall this query, which was among those submitted:

[This one is excellent, but seems a bit long. I've placed brackets around things that can go without affecting the content or tone.]

THE BIG SPLASH – approximately 60,000 words – is a hard-boiled detective novel for the middle grade set, with strong archetypal characters and dialogue that’s quick and punchy, like a flyweight boxer on too much caffeine.

Matt Stevens is smart, witty and tough as a cheap steak in a bad restaurant. He’s a middle school Philip Marlowe, [a Sam Spade in the seventh grade,] and he just did something he said he’d never do: he accepted a job from Vinny “Biggs”.

Vincent Biggio, [a.k.a Vinny “Biggs”] is a pre-teen Al Capone. Vinny’s got his chubby little fingers in a lot of illegal pies baked at James Franklin Junior High: extortion, racketeering, black market sales of stolen exams. Matt trusts Vinny [as much as] [like] a deer trusts a guy in an orange vest, but Vinny just made him an offer that was hard to refuse: twenty bucks to return a good luck charm [that] Vinny had lent out long ago. The problem? The girl he lent it [out] to is Nicole Finnegan, a.k.a. Nikki Fingers, the most feared squirt gun assassin [to ever attend] [at] Franklin Junior High.

You see, life at Franklin is tough, like trying to play the piano [with] [in] oven mitts [on]. Find yourself on the wrong side of Vinny Biggs, [the next thing you know] [and] you’re in “the Outs,” the least popular “club” in school. How’d you get there? Water, apple juice, cat pee… anything liquid, strategically splattered below your belt for maximum humiliation, [marking you forever as an enemy of Vinny Biggs.]

While Matt is negotiating the return of Vinny’s good luck charm, someone puts Nikki [on] [in] “the Outs”. Matt has to juggle two clients (Vinny Biggs and Jenny Finnegan, Nikki’s younger sister) as he tries to find the trigger kid [amongst a list of suspects as long as a New York City phone book]. Was it Joey Renoni, the hit kid with a high-pitched giggle and a hair trigger[, who was always looking to prove himself against the baddest and the best]? Was it Kevin Carling, [Matt’s ex-best friend, ] Vinny’s right-hand man, and the boyfriend that Nikki left behind when she quit the life? Or was it some other kid with [“]soda-induced courage,[” a friend or relative in “the Outs,”] and a big beef against Nikki? Matt’s got to watch his back, and [especially] his front, as he works a case that’s harder to navigate than the streets of downtown Boston[, or he just might find himself on “the Outs].”

On a personal note, my eighth year as a writer, director and dialogue editor for children’s television animation has been a great one. In January, I was nominated for an Annie Award for best writing in a television series. I also wrote, developed, and directed a series of shorts that will be airing on (NetworkA) in November. [(NetworkA) ordered forty half-hour episodes based on the strength of those shorts, stating that the writing was the main factor in their decision.] I’ve just started writing the second Matt Stevens book in what I imagine to be a series, chronicling the life and hard-boiled adventures of Matt, his classmates, and his family. May I send you a full or partial manuscript of The Big Splash?

Thank you so much for your time. [I look forward to hearing from you soon.]

[Well done. While your characters are in middle school, one wonders if your audience might be even younger, as middle schoolers these days would identify only with kids using real guns.]
Posted by Evil Editor at 9:00 AM

Wow...Thanks EE for your comments. I knew it was too long, but wasn't sure what to cut (I imagine my ms will have the same issues). Your suggestions for the chopping block were right on. It's pretty amazing of you to offer your services for free. I hope you receive some good karma for this, as well as the occasional gift ham.

I loved the tone in this query letter. I would totally go out and buy this book even though I'm several decades out of 8th grade.

I'm thinking this is for slightly younger middle grade. My 3-5 grade kids would eat this up.

I'm seventeen, I would read this. It reminds me of the muppets in that it is entertaining for kids and includes jokes for adults.

(From The Great Muppet Caper)

Lady H. details all her troubles with her brother Nicky to her new secretaty (Miss Piggy) who asks, "Why are you telling me all this?"

"It's plot exposition, it has to go somewhere."

Another congratulations. Nice to see success.

Man, that's a hell of a review. Congratulations.

It's a vicarious thrill to see something go from the pages of EE's blog to a review in the NY Times.

Congrats on making the NYT.

And we long-timers here at Evil Editor's are thrilled to take some vicarious credit for recognizing quality in its nascent stage.

What a great review! Awesome. Congrats!

That's the kind of news I love to see when I open the paper in the morning! Congratulations!!

This was wonderful to read.

Congrats to the author!