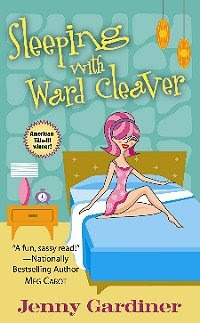 I'll be creating a book trailer for a book titled Sleeping with Ward Cleaver. The auction winner got it as a gift for the author of the book. Here's a brief synopsis:

Protagonist Claire Doolittle--a 39-year old mother of five and caretaker of a menagerie that includes a three-legged mutt named Tripod and a verbose parrot who burps exactly like Claire’s husband--has had it with her desiccated sex life and tapped-out existence. Married to the still-handsome architect Jack, she finally realizes that her one-time Adonis has morphed into the new-millennium version of Ward Cleaver, father of The Beaver and all around mundane middle-aged man. And the last person in the world Claire ever imagined having to sleep with on a regular basis is a man whose sex appeal more closely resembles that of George Washington than George Clooney. Claire is in for a life crisis as she realizes that in her quest to suppress her lack of desire for her drab-yet-stern disciplinarian of a husband she has also completely suppressed her yearning for much of anything. Or anyone. And when she receives an email from her almost fiancÈ Todd Sterodnik--who dumped her years earlier for a blond bimbo named Vanna Black--making nice and trying to weave himself back into her psyche, Claire learns that sometimes you have to delve into your past to determine your future.

Claire’s determination to join Jack on a Miami business trip to try to revive their stale relationship is thwarted by her less-than-enthusiastic spouse, who, she discovers, will be accompanied by his much younger and far more nubile colleague Julia Juilliard, whom Claire dubs “the home-wrecking homebuilder”. So Claire sets off alone on a spy mission to Miami, intent on learning the true nature of Jack’s designs and to maybe indulge in some long-needed R&R. All bets are off when Todd shows up to try to sweep Claire off of her world-weary feet, and Claire has to straddle the fine line between unwanted responsibility and unfulfilled desire.
When Claire finds her husband in a suspicious embrace with his colleague, Claire accosts him. An argument ensues and Jack, whose father died at 47 from a heart attack, experiences chest pain. Claire is jarred to her senses with the fear that she might lose her husband, and rallies into action. Jack is rushed to the hospital, where they learn that Jack had merely suffered an anxiety attack. For the rest of the weekend in Miami, Claire and Jack finally take the time to do what they hadn’t done in years: discuss their lives, their hopes and dreams, about how they became so disconnected, and how they can try to rekindle interest in one another. Claire and Jack end many hours of tears and recrimination by making love for the first time in ages minus many layers of animosity. Later Jack, who’s been training for a marathon, encourages Claire to join him on a run, and Claire realizes how therapeutic taking time for herself, even just running, can be. As the weekend comes to a close, Claire and Jack have begun to reconcile their resentments and regrets, and are committed to rebuilding their once-solid foundation.

They arrive home to find that Jack’s mother Candy, who watched the kids, has organized a regimented system to help Claire gain control of her out of control life. Over the next few months, everyone in the family assumes responsibilities for righting the imbalances in their lives. Claire and Jack have found a common bond in running; Jack has persuaded Claire to train for the marathon with him. The kids begin to help out around the house, and life starts to feel the way it should have all along for Claire. Claire learns in an e-mail from Todd that he’s been able to reunite with his son; she receives a thank-you e-mail from his son for her role in their reunion. Another e-mail from Todd reveals that his wife is expecting a baby, something that he once eschewed but now embraces. Claire and Jack run the marathon together, Jack finishes first and turns back to help Claire with the last desperate half-mile.

The next night, after best friend Kat’s wedding, an enfeebled Claire and Jack return to their hotel, tired but happy, whereupon Claire cagily proposes that she and Jack engage in a little elevator sex. When she and Jack furtively make love on the elevator, Claire is happily fantasizing not about Ward Cleaver, but about her own Eddie Haskell, the bad boy she long ago chose to spend the rest of her life with.


Excerpts and other info are available if you google the title. Suggestions for what to include in an amusing trailer are being taken.
Posted by Evil Editor at 11:16 AM

Personally, I think the trailer should spend about 80% of its time on the dog and the parrot.

And I think I just proved why I should not be involved in this project.

Well, I think it has to end with a parrot belching...

Maybe the trailer is the elevator sex? I'm sure Robin will vote for that one. We can still end with the parrot belching.

BTW. That's one heck of a synopsis. Should they be that long? Just curious.

IMHO, the funniest thing in this is the title and the first sentence.

Slap the book cover at the end and you're done. Instant YouTube hit.

I'll be posting your suggestions for the trailer, not comments on the synopsis or the book.

Well, that's one complicated plot but for a book trailer, you might try doing a picture of Claire and Jack (and other more major characters) and doing a summary of their problems.

Like: Meet Claire. She's married to Jack. Jack's a dud in bed and Claire begun to think that her live is headed to dullsville.

Meet Jack. Ward Cleaverish husband who's so out of touch that he has no idea that Claire is about to go over the deep end.

Meet the Parrot: BURP! (Was it the parrot who burped?)

Meet the Elevator (it's a character, right?). This is where Jack and Claire finally clear up most of their problems.

I love Judy's idea of having the elevator as a character.

I wonder if you could do that without spoiling the plot?

Have a parrot's voice narrate the events like "This is the house that Jack built"...

Claire would like you to meet her family:
i) Tripod, the three legged dog
ii) the Parrot who sounds just like
iii) her husband Jack,
iv) who's off on a business trip with Claire,
v) who's followed by Tod Steroids
vi) and an elevator in Miami where they all meet over Jack's heart attack. (this is a climax)

Then go to the book cover.

My two suggestions may not qualify as anything you end up using but: if Claire drives to FLA be sure to have the gas prices featured prominently, and if possible, have a shot of Tripod training for the marathon with Claire and Jack.

Elevator sex. SomethingI haven't tried. Wow. And never will, now that they all have securit cameras.


I say the trailer is all about running and sweating and sex. Maybe to the tune of Chariots of Fire, with the fast fast guitar riff ending of that redneck masterpiece, the haunting and lovely Free Bird tossed on there at the, um, tail end.

Love the title and book cover.

I'd begin the trailer with Claire in lingerie looking longingly at her husband, until he and the parrot belch in unison... return to a disgusted Claire, now wearing flannel pajamas and tossing the silk teddy to the three-legged dog... the passion is dead.....

There's plenty in the synopsis to have a hilarious trailer - have fun!

I don't have motion picture abilities. It won'r be any fancier than the ones at evileditor.net. As for music, I can't use Free Bird without permission. I'll have to find something free on the net or use classical music.

Remember, even if it's classical music, the music might be out of copyright, but the performance could still be restricted...

Guys, guys, guys....I was teasing about the Free Bird thing.

Although I wasn't teasing about the security cameras on elevators.

"I'd begin the trailer with Claire in lingerie looking longingly at her husband, until he and the parrot belch in unison... return to a disgusted Claire, now wearing flannel pajamas and tossing the silk teddy to the three-legged dog... the passion is dead....."

Wait a minute. Are you saying flannel pajamas aren't exciting? Not even with little purple flowers?

Beethoven's Fifth for the death of the relationship. Then something a bit more upbeat for the elevator sex / marathon running / gee we have so much in common ending. Pachelbel's Canon for the elevator? And the parrot belch over the final title.

And the intro should be based on the scene in Robert Altman's Ready To Wear (Prêt-à-Porter), in which reunited lovers Sophia Loren and Marcello Mastroianni have gotten together and are going to bed. We see the gorgeous-as-ever Sophia stripping down to black lace undies, talking to Marcello (in bed) over her shoulder. She turns to join him--and he's fallen asleep!

Just because they're on YouTube doesn't make them public domain. It wouldn't be a great kindness to hand the author something they can't use because of copyright infringement issues.

I haven't watched the existing trailers, because it takes hours to dload anything like that on my crappy dial-up. And I'm still unclear about who the heck Ward Cleaver is.

However. I've asked husband to dload the trailers using his sparkly work broadband, so maybe I'll have some better ideas after I've watched them :).

EE, if I could get a new computer and new notation software, I'd compose something for you.

Alas, you will have to find something on the Internet.

hi! showing up late here b/c i am away an havent had internet access (nor can I find the right punctuation on the keyboard at this internet cafe). apologies for the enormous synopsis--i had to scramble to find one in my files as i was departing from airport so hadnt time to find the right one. shouldve just sent the back cover copy but oh well, sorry! thanks so much EE for undertaking this project for me--it was all quite a surprise for me from my friend. will touch base when im back!