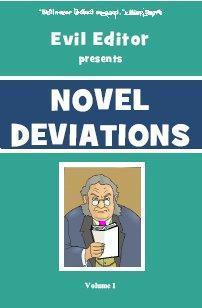 Some of you will receive copies of Novel Deviations in the next day or two. Here are a few answers to questions you may have.

In the front of the book, it says copyright 2007. Although the odds are against it, it's possible the book could get reviewed in some magazine--but the big-name reviewers want the book at least three months before it hits the bookstores. So this book has an official publication date of March 2007. It won't be available in bookstores until then. I've made it available on the blog so the authors could get copies in advance of the publication date (and in advance of the holidays). If a few other people have taken advantage of this, so be it.

If the only pieces you care about are your own, you'll find a list of contributors in the back, along with the story numbers to which each contributed. It might even be fairly accurate.

The order in which the pieces appear is not indicative of anything. I divided them into groups of ten, and put a few of my favorites into each group. My favorites may not be yours, however.

If you haven't ordered a copy, you may be wondering what you get that isn't available on the blog. Not much. Two opening authors didn't want their pieces used, but were kind enough to allow Evil Editor to massively edit them, maintaining the tone and content but not the words. Three continuations were replaced with better ones, but in one or two of these, the replacement was made on the blog as well. Several of the earlier New Beginnings didn't have continuations, but now do, and some of those made the book. And there's a brief introduction. In short, the main advantage of the book is not extra material, but the convenience of not having to scroll through eight months of posts to read the better New Beginnings. Or as a gift for those who read books but not blogs. I do think that for those who "get it," this is one of the funnier books you'll read.
Posted by Evil Editor at 5:24 PM

I think people will think it's a scream, EE.

If not, I'll report back.

I certainly have a question, Mr. Evil.

They made me dress up for the photo shoot. Wait'll you see what they made me wear for the back-cover photo.

I read the one with Giuseppina Guillaume and the plum thing (one of the funniest IMO) to my sister over the phone. The hiss of static and a polite cough was her only reply. Philistine. Honestly, I think she's missing a crucial region of her prefrontal cortex or something. Then again, I had to explain six times just what the openings and continuations were, so maybe she's just a little slow on the uptake.

Here's hoping I get a long distance call from her two days from now: "Ohhh, hahaha. 'Mind if I call you Jo?' Hahaha! Now I get it!"

Curious. How's it selling so far? Any evidence that someone other than the minions are buying it?

There's no reason to believe anyone who doesn't visit the blog knows it exists. Only pre-ordered copies have been sold, about 75 copies (to about 40 people) mostly to contributors. Those who bought several are probably giving copies as gifts to non-minions.

EE, you tease! Hold on. Did the Mrs. approve your outfit?