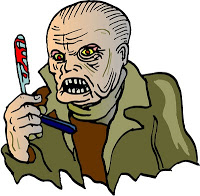 The fake plots below have all appeared on this blog since the last time we had a Serial Killer Guess the Plot Quiz. But wait! Two of these plots turned out to be the actual plots of minions' novels. Do you remember which two?

1. When a serial killer starts leaving his victims' body parts encased in amber all over the city, Detective Zach Martinez knows two things: the police's geological consultants are also his suspect pool, and he's definitely getting his wife a different semi-precious stone for their anniversary.

2. The "Lipstick Killer" is on the loose, so called because he kisses his beautiful victims and smears their lipstick before strangling them, but efforts to capture him are hindered because the sheriff hates the police chief.

4.When Quinn Masters, firefighter extraordinaire and chef with a flair for flambe, discovers a charred body in her garage, she totally throws up. But as the bodies begin to mount, Quinn secretly investigates the murders. The more she discovers, the more worried she becomes. Could she be the serial killer?

6. Seemingly random online strangers find themselves on a serial killer’s potential victim list. Will they discover in time that the  killer is a Grammar Nazi trying to eliminate the biggest online offenders of the English language?

7. After Mercy is kidnapped, raped and tortured and nine other people are murdered, she decides that the killer is the cop investigating the crimes. No one's likely to believe her so she must solve the case herself. But can she survive a rigged death match and bring in her quarry before the Afghan War veteran trying to avenge his slain grandma does?

8. Ryan Carver analyzes footprint molds for the FBI. He's also a foot fetishist. And Washington DC's latest serial killer has the most heart-stopping size 7s he has ever seen.

The actual plots are numbers