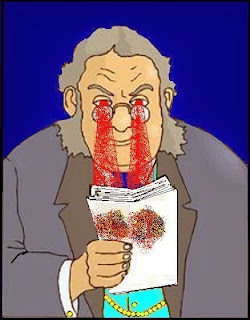 1.  During a murder trial, Dylan Sneed realizes that he committed the murder during a drug-induced blackout. Which is a bit awkward, since he's one of the jurors. He reveals this situation to his therapist, not realizing that she is married to the trial's defense attorney.

2. We all knew Blak committed the murders. But we could also see how bad he felt about it. He had those sad, puppy-dog eyes, and clearly he was crying on the inside. A lethal injection would only make him feel better. We couldn't allow that. We had to let his torment continue, to punish him the way only his conscience could. We, the jury, had to decree his ... Innocence by Guilt.

3. Rafael's face is on a surveillance video showing him committing multiple murders. He proves his innocence by pleading guilty to a robbery which occurred at the same time as the murders, where his face appeared on the liquor store's surveillance video. Both videos can't be right . . . or can they?

4. Horse trainer Kelly Brockton has a grand total of $50,000 to spend at the Keenland yearling sales. When a pot-bellied bay colt by distance runner Guilt comes into the ring, she knows she's found her Seabiscuit in the scrubby little horse she calls Innocence.

5. When a swine flu scandal forces Hannah McKinney to resign from her job as lobbyist for the pork industry, she decides to return to her hometown of Innocence, Alabama. It's a long drive down a narrow highway, through the notorious speed trap town of Guilt, Missouri. Will she escape with just a ticket . . . or lose her heart to a hunky, pork chop-chomping, motorcycle officer?

6. When he learns that his grandfather was a WWII Nazi concentration camp Kommandant who signed off on the liquidation of hundreds of thousands of people, Stefan seeks atonement for his relative's guilt by joining the Israeli army.

I was honored to pitch my 64,000-word mainstream novel, Innocence By Guilt, to you at the 2013 DFW Writer’s Conference, and was thrilled when you requested the first fifty pages, which are are pasted below.

While serving on the jury for a capital murder trial, Dylan Sneed, an alcoholic also addicted to drugs and Hooters girls, realizes something about himself: he is a murderer. But not just any run-of-the-mill murderer. Dylan discovers he is responsible for the death of the victim in this case. A death that occurred during a night of one of his many drug induced blackouts. As an attempt to assuage his guilt, [without actually confessing to a crime that might land him in prison instead of the poor schmuck who's on trial,] Dylan begins therapy under the direction of Dr. Abigail Graham, who is on her own journey. Abby quickly realizes that her attorney husband, from whom she is nearly estranged, is defending the man accused of Dylan’s crime. Dylan and Abby must both navigate their past and present relationships to figure out a way through the trial, and accept whatever consequences those actions might bring.


[Dylan's Dilemma
If he votes for a guilty verdict, an innocent man might be put to death, and it would be months before Dylan stopped suffering feelings of guilt. If he refuses to vote for a guilty verdict, either: 1. The accused will be found not guilty, in which case the cops might reopen the investigation and find evidence Dylan is guilty. Or: 2. There'll be a hung jury (possibly an embarrassing 11 -1), in which case the innocent man might be retried and given the death sentence, which would be almost as bad as #1.

Abby's Dilemma
If she doesn't reveal what she knows to the authorities, an innocent man might be punished while her guilty patient is free to kill again. Although . . . if he continued as her patient there might be a book deal with film rights in her future. If she reveals what she knows to the authorities: 1. None of her patients will trust her to keep their secrets, and at least one of them will decide she needs to be silenced before she blabs about his affair or crime or sexual deviance. And: 2. Her asshole soon-to-be-ex-husband will win his case, and she'll be damned if she's gonna miss this opportunity to throw a big obstacle into his rising career path.]

This dual-perspective narrative explores the notions of guilt, innocence, and the decisions that determine them. I have published three articles in Clean Run magazine, the world’s leading publication on the sport of canine agility.

Thank you for your time and consideration...

Anyone subject to drug-induced blackouts would surely reveal this during the voir dire process in hopes that it would get him out of jury duty. Which I assume it would.  Thus I suggest making the judge the murderer. Sure, the judge could recuse himself on the grounds that he/she committed the murder, but I suspect he/she would be smarter than that, and would simply steer the jury into finding the defendant either guilty or innocent, depending on his ethics.

The idea of a juror suddenly realizing he's the guilty party is cool. However, as a juror being the killer is such a huge, hard-to-swallow coincidence by itself, it's going to be hard for anyone to accept the additional coincidence of the killer's therapist being the attorney's wife. Maybe these should be two separate books.

I submitted GTP#2 (including the typo -- it was supposed to say Blake not Blak) and when I read GTP#1 my first throught was that it was more clever and funny than mine and might actually be a good idea for a real book, minus the therapist part. Ha!

One question I have is whether the book is meant to be dark humor. The name Sneed and the mention of the Hooters girl addiction suggest it might be, but those are the only things. If it isn't humorous then I agree with EE on losing the Hooters mention and might also suggest changing the name. If it is humorous, maybe make that come through in the query more.

The thing that gives me the most pause is that I should care about Dylan, or his therapist. I can't see rooting for a main character who would let an innocent man twist in the wind while he sits there listening to the testimony and knows he himself is guilty. Not that all main characters have to be likeable, but I think it would be tough to pull off a book with one such self-involved narrator, let alone two (since the therapist could solve the issue with a simple anonymous phone call.)

That being said, your hook is fresh and intriguing enough that, if I were an agent, I would be willing to give you a chance and ask for pages.

Two things. One is... why didn't you send the manuscript when the agent asked for it last year? You don't have to tell us the reason, but you might mention it to her.

The other is... pretty much what they said. How do we not love Dylan? Let us count the ways.

This goes a bit beyond the little flaws that make a protagonist lovable.

Since #4 amounts to the first question everyone will have, better address it somehow.

Also, there's too much coincidence going on, unless the story is set in a town of 17 people. (They being: A judge. Two attorneys. A falsely accused man. A therapist, in the process of divorcing one of the two attorneys. Twelve good people and t... er, eleven good people and true, plus the protagonist.)

The plot kind of reminds me of the early mystery novels, when every possiblity was tried at least once... the butler did it, the small child did it, the detective himself did it, everyone did it, the victim has been poisoned and solves his own murder prior to his death, etc etc.

The number of sentences here that could start with "By sheer coincidence..." Is just too many for one novel. It's very hard to pull off more than one of these and not loose your readers' suspension of disbelief. It's even harder if the readers don't feel invested in the characters and, like ARC pointed out, it's very hard to feel invested in Dylan from the query.

If there is some reason we should care about what happens to Dylan - he's cleaned up his act since getting blackout drunk/high, he has a family, he reads to sick kids - that needs to be in the query. Right now, I'd be fine with Dylan being found out and suffering the consequences for his crime, especially of the alternative is an innocent man taking the fall. Abby's dilemma is much more interesting: break her doctor/patient confidentiality, or let an innocent man be convicted of murder?