So, I purchased a package of 10 ISBNs when I started Evil Editor Publications. I've used 8 of them (Evil Editor Strips needed separate ones for the hardcover and softcover versions). In order to get my money's worth, I need to publish 2 more books. Possibilities:

1. The hardcover leather- bound edition of Novel Devia- tions, consisting of the 50 or so best ones from each of volumes 1, 2, and 3, plus the 50 best that appeared after those books were published. Actually, the only reason those books were called Novel Deviations was because another book had just come out titled Novel Twists, so I might go with that title now that years have passed. Of course, I can't find Novel Twists on Amazon, so maybe that book totally bombed because of the lame title. Maybe I should call it Oliver Twists, in hopes it will be purchased accidentally.

2. The History of the World in Tweets. Compiling the best of the recently tweeted historical tweets, plus adding some more. Not really the history of the world, as most of what happened before the 14th century wasn't kept track of because no one knew how to write and every country had its own calendar and nothing of much interest happened most years anyway. Possibly illustrated with cartoons starring EE through history. 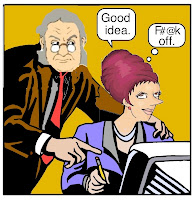 3. Mrs. Varmighan Tweets. The tweets of Mrs. V, each accompanied by its own cartoon.

5. Photo album of highlights of the first Evil Editor Writers Retreat, yet to be scheduled.

6. A novel by one of my minions whose query appeared on the blog.

8. Whirlochre! A compilation of my favorite posts from Whirlochre's blog.

9. Novel Ideas. 1001 brilliant ideas for novels, compiled from the approximately 6000 fake plots that have appeared on the blog. Illustrated.
Posted by Evil Editor at 9:06 AM

A history or the world in tweets could be contest material for the "fractured fairy tale" type tweets dealing with real history.

#4 would be great if you also highlight queries that worked.

#7 could be interesting. Slight title tweak: Bedding With Evil

I loved the tweets, but I don't know how they comprise a book.

The Romance novel or the 101 Query Letters, for me. Not that I'd buy either. But then I'm cheap.

#9 sounds good. Writers love prompts, and I like the name.

#4 would only work for me if it highlighted all the worst, most confusing queries. That's where the comedy value is for me. They could be anonymous.

#7, which could possibly include appearances by Miss Snark and references to EE in New Beginnings, Face-Lift, Guess the Plot, Synopsis, and Queries

#2 and #9 sound they would have most commercial appeal. Dave's contest idea is good because all the contest winners will buy a copy :)

For #4, you need to call it "How to write a query letter than really works" and have both good and bad examples. Maybe Don't Do This, Do This, and some of the ones that went on to be success stories?

I know I'm new here, but I was voted 'Most Likely to be Photographed at a Writers Retreat' back in high school and I'd like to scratch that one off my To Do List.

So, don't forget to include me in the Evite for the writers retreat when you firm up the details...
Thanks! :)

Or how about a best of blog cornucopia of all of those? Variety is the spice of life, after all.

I have recently discovered that prolonged exposure to my material risks bringing Liberace back from the dead.

I'm for the actual retreat, and then an after-party.

Assouline has the most beautiful edition of The One Thousand and One Nights that will soon be mine. A fake plot and/or query version of this with illustrations would be my preference.