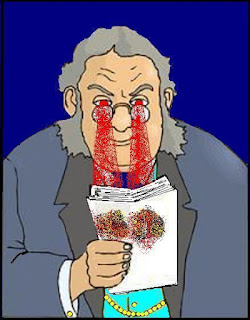 1. The queens of Nerflea have an unusual hobby - luring their lovers into the secret room behind the mirror and biting off the heads of the men who would dare to woo them. But when those men behind the mirror grow new heads and begin to form an alliance, the queens are in for the fight of their lives. Also, a didactic alligator.

2. Forget primogeniture, the tradition in Aelfren is for omnigeniture, in which all the king's sons become kings themselves. Within ten generations, there are more kings than peasants in Aelfren, and with a far greater sense of entitlement. Let the regicide games begin!

3. A sweeping family saga. Over the course of 300 years, from the days of the Puritans to the Watergate scandal, the King family of Aelfren, New Hampshire, occasionally thinks of doing something or going somewhere but invariably changes its mind.

4. Mitch and Lee were finally going head to head in the match of the century. Althea was the hostess with the mostest, and she made flags with each of the competitors' crests. She loved them both, but she couldn't let them know that fact. With the fate of modern knighthood in her fragile hands, would she finally find her knight in shining armor, or would they both turn out to be university prats?

5. Accused of killing the king of Aelfren, Dunstan of Abrotanum is on the run. Will the new king of Aelfren hunt him down before Dunstan can clear his name and regain his own throne and find out who framed him and take his revenge and save his childhood sweetheart?

6. Okay, it's complicated. Aelfren has two kings, one of whom occupies the throne when Aelfren is at war, and one who occupies the throne when it isn't. The system has worked for centuries, but King Chelron is beginning to suspect that King Lesther is prolonging the war in order to keep the throne. Does a peacetime king have the guts to start a civil war with a warrior king?

Dunstan of Abrotanum used to be a prince. Now he is a fugitive, accused of murdering good King Balther of Aelfren. Dunstan is innocent, but his only proof is that someone tried to murder him as well – [If only he had an alibi, like he was in bed with a princess the night of the murder.] and since he fled to escape his assassin, even Dunstan must admit he looks guilty.

In a war-torn empire of quarreling city-states where the three remaining kings play against each other at every turn, Dunstan must find out who is friend and foe – for someone he once trusted is trying to kill him. Is it his fellow prince and childhood friend who seeks more power of his own? [No. It's never the first person on the list of suspects.] Is it his old mentor who struggles to keep the realm together after Balther’s death? [That guy wouldn't hurt a fly.] Is it the cunning princess he accidentally slept with the night of the murder? [Accidentally?

Princess: Was it good for you?

Surprisingly, the only person he knows didn’t try to kill him is the one who has every right to want him dead: his traveling companion Kevoca, a warrior maiden whose people have been butchered for centuries by the warriors and kings of Aelfren and who vows to protect him after Dunstan saves her life. [This makes it sound like Dunstan's people have been the butchers, but Dunstan is Abrotanumian and the butchers are Aelfrenians. I know this from the first paragraph, which states that Dunstan of Abrotanum is accused of murdering Balther of Aelfren.]

[Kevoca: I know your people have been butchering my people for centuries, but if you let me be your traveling companion, I'll protect you.

With Kevoca by his side to keep his noble head on his shoulders, Dunstan has three goals. First, clear his name and regain his rightful throne. Second, save Orora, his childhood sweetheart, the daughter of King Balther. [From what?]  Third, find out who framed him and take his revenge – even if it means killing a few kings along the way. [That was five goals. Six if I include killing a few kings.]

THE KINGS OF AELFREN is fantasy, aimed at the crossover between YA and adult. It is my first novel.

What's this about Dunstan regaining his rightful throne? What throne is rightfully his? Abrotanum's? Does Abrotanum have a king?

Is any story set in a fictional place considered a fantasy these days? I think of a fantasy as featuring something fantastical: wizards/sorcerers/magic or dragons/monsters or vampires/gods/weredingoes. Does this book have a supernatural aspect?

Is Dunstan aware that Kevoca is the only woman he can be happy with, or does he think Orora is his true love? Orora's the one who tried to kill him. She was hiding in his closet, planning to surprise him the night he "accidentally" slept with the cunning princess.

Evil Editor's rule for those who insist on making lists: no more than one list per query, no more than three items on the list. You can condense the Goals paragraph down to: With Kevoca by his side to keep his noble head on his shoulders, Dunstan vows to clear his name and regain his rightful throne – even if it means killing a few kings along the way.
Posted by Evil Editor at 11:32 AM

I'd read #1 just for the didactic alligator.

I'm trying to analyze, though, why I read this query with sinking heart.

Okay, I think it's because there's nothing that makes me root for Dunstan. He's a prince. He's surrounded by hot babes eager to serve him in various ways. He wants his "rightful" throne, but I find I don't believe there is such a thing as a rightful throne. He wants revenge, and that's not a nice thing to want. In fact, it may be his only redeeming flaw.

You're not showing us that Dunstan's back is to the wall so much as that he's unusually privileged and advantaged. Normal young men don't have ladies vowing to protect them or accidentally sleeping with them.

That's my take on it, anyway. Be interested to see what others think.

Oh, and YA/adult crossover is something that happens after publication. You can't sell a book as such. Pick one or the other. If YA, show us why it's YA.

I'm with Alaska, I want the didactic alligator. Once again, the fake plots are more intriguing!

Would this query run better if it started with Dunstan and Kevoca's bond, then put him in peril? Kevoca sounds like a more interesting character, with a fine internal conflict. You need Dunstan to be as interesting as her, at least.

What kind of empire allows city-states to keep their independence and to wage war on each other? One so ineffectual you may as well not mention it.

So Dunstan didn't kill King Balther but is prepared to kill "a few kings along the way". Explain why I should care about this guy.

One, he has a warrior girl with him, but the reason really isn't clear. Is she a loyal friend? Someone his family treated with respect? Why does he need a girl to protect him anyway? He can't handle himself?

Two, there's the princess he's been sleeping with. What part does she play in this? Does she bat her eyes at Daddy to get him to leave Dunstan alone? Or is she enraged when she finds out he's hanging with some barbarian chick with a sword?

Actually, you could probably take these three and make a pretty fun romcom romp out of them.

I'm thinking the only reason why someone should be trying to claim his rightful throne in a book is when the guy in charge is very obviously evil, or when there's some sort of ancient prophecy involved, or both. I can't tell if the current king is doing a pretty good job or not. How evil is he? Does he drown biddies in his spare time, as my Grandma used to say?

I don't know about "warrior" people being butchered. I think Vikings- they're usually the agressors. If they were "butchered for centuries" they aren't really warriors and they'd all be dead by this point in the story.

So this one guy and his Kato-like sidekick are going to get back into the kingdom somehow (without him being recognized), regain the throne, kill some kings (which are generally well-protected), find out who sold him down the river, get even, marry his childhood sweetheart and live happily ever after? Have you been watching the Princess Bride?

I'm really quite embarrassed to admit this, but this sounded so much like the Prince of Persia movie that I thought it might be a joke query at first.

Possible suspects include fellow prince and a childhood mentor? Check.

Prince goes on the run with a warrior maiden whose people have been attacked needlessly? Check check check.

And the name of the prince in the movie? Dastan.

I'm honestly not suggesting you ripped off a video game movie, but I am suggesting some changes in the query so any prospective agents don't dismiss your story as such.

The name Dunstan was bothering me because I associate it with St. Dunstan, a 10th century Archbishop of Canterbury, and it was causing me some real cognitive dissonance...