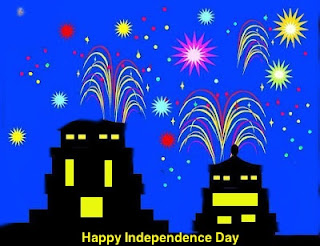 Fangs for All the Kitsch

1. It's been 875 years, and Ian MacNeil is ready to retire from an active life of blood-sucking to Hawaii, where an endless supply of young bodies awaits and he can admire his massive collection of velvet Elvis paintings in peace. All he has to do now is survive the roast his fellow vampires want to give. It's just a few hours of jokes...isn't it?

2. When Bubbe, the senior center queen, became a late night snack for the undead it put an end to her days of the senior special. But not sleeping all night made her the number one buyer of the QVC. How much kitsch can one vampire have?

3. Gus fakes his death and attends his funeral in disguise. There he learns that Bidgette had a crush on him. To win her he must return from the dead so he fakes being a vampire. But now he finds himself dealing with actual vampire hunters with their cheap crosses and stakes. Plus, Bridgette wants him to turn her so they can spend eternity together.

4. Tiki Bob's place is stocking more and more plastic werewolves. Cat doesn't want to get involved, but when rookie detective Albert Mooney begs for her help - and a date - she bites.


5. Two vampires buy a gift shop at Myrtle Beach. It's the perfect spot to hunt victims, but Vlad loves being surrounded by plastic mermaids and coffee mugs, while Ramon wants to convert the place into a fine dining establishment. Talk about your odd couple.

[No one wants their real query posted on a holiday, so here's a fake, written by Heather as part of a writing exercise.]

Amateur special effects artist Gus Parker is outed as a Twihard during the biggest pep rally of the year, and he goes from social pariah to almost drowning by swirly. To escape the torture, he fakes his own death in an after-hours chem lab explosion. His demise makes front-page news, and the turnout for his funeral is fantastic. When he sneaks in to witness the eulogies from his classmates, he hears the one thing that could have saved him: tearful homecoming queen Bridgette Johnson was crushing hard. If he wants Bridgette—and he definitely wants Bridgette—his only choice is to come back from the dead.

Bridgette is predictably enthralled with the mysterious, brooding Gustav, but faoing vampirism is exhausting. When he's not airbrushing himself alabaster and rolling in body glitter, Gus strategically hides painted-foam boulders around town, learns to drink pig's blood, and uses every special effects trick in the book to save Bridgette from imagined dangers. Hauntings, attacks by rival vampires, and even retribution from a vampire hunter for loving one of the damned are all thwarted without a hitch... at least until Bridgette starts blogging about her unnatural love and Gus realizes a crucifix-wielding transfer student is stalking him.

Gus can avoid a stake to the heart if he just comes clean, but admitting the truth means getting arrested for fraud and destruction of property, earning the hatred of the entire school (just when they'd dedicated the yearbook to him), and losing Bridgette forever. But Gus figures real-life vampire hunters can only mean one thing: real life vampires. Gus uses all his Hollywood know-how to convince the hunter he's too badass to take on solo, and then backtracks his slaying spree to what might just be a hotspot for the actual undead. Now, he must trick a vampire into siring him before the lights come on and the reel winds down, but it won’t be easy. The other vampires doubt his reputation, the hunter is hot on his heels with reinforcements... and Bridgette wants to spend eternity together.

FANGS FOR ALL THE KITSCH, imagined at 75,000 words, is a paranormal romance and my debut into the world of fake YA novels. The first five pages are included, and the entire manuscript is available upon request. Thank you for your consideration.

It's brilliant. Write it or give the Minions permission to steal it.
Posted by Evil Editor at 9:34 AM

Wow. That sounds so much better than 90% of what we see.

"Twihard". *laughs hystericallly." and it only got better from there!

Thanks guys--although, I think you're being easy on me because it's a holiday. ;) But if you do have any concrit for the query format, I'd love to hear it.

And thanks for the venue, EE! Two years of following query blogs and this is the first time I've gotten to participate. It was a super-fun exercise, and I'd love to do it again (or, you know, finish my novel and submit a real query).

Heather that's fantastically funny! Do write it. You'll rake in the cash and kudos :)

Query format - first para is a bit synopsisy. But who cares - Janet Reid says the sole goal of a query is to get 'em to request pages and for that you hit it out of the park.

Now all she needs is the pages.

I love this story idea. If I knew more about vampires than the first 50 pages I managed to slog through in some Anne Rice novel, I'd love to write this myself.

And Heather, I think this query really does the trick. It was easy to read, had tons of fun plot points, and kept my attention. Great job!

As to GTP 4, Tiki Bob doesn't have a shop - yet. But if he did, those plastic werewolves would need bobbing heads or he wouldn't stock them. No one in their right mind would get involved when bobbing-headed werewolves are in town, even Cat. Exactly how hunky is this rookie detective?

Haha, no seriously, Heather, this is what they mean when they say "has a high concept." Your query format is fine, maybe a little on the long side, but I kid you not, this is a winner of an idea, and your voice comes across great. I mean, make sure you spell "faking" right, but you'd get pages requests on the strength of this query, I guarantee it. Make it so.

We do not "go easy" around here for holidays or any other reason.

You had me at "rolling in body glitter." Love it!

You still can! I'm sure it would be a fairly quick first draft, and loads of fun to write. You already have a great query letter - why not just work from there?