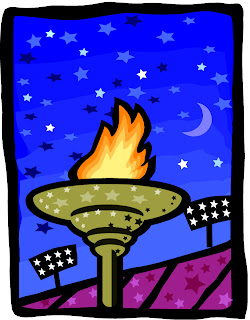 I suggested some of the following ideas four years ago. It'll be interesting to see how many of them they've incorporated. Also, I've added some new ones. Change with the times, IOC.

1. In beach volleyball, the tall players have an advantage. Thus, I recommend that springboards be installed in the area of the net to aid the shorter players in spiking and blocking.

2. In the men's high bar, the athletes are lifted to the bar by a guy. This is humiliating. I suggest that it would be more spectacular if they had to pole vault over the high bar and then grab it on the way down, smoothly beginning their routine as they do.

3. No one ever sticks the landing on the gymnastics vault, as they have too much horizontal momentum. Thus, instead of landing on mats they should land on one of those small trampolines--the kind mascots use to dunk basketballs at halftime. This would allow them to spring upward, creating vertical momentum and allowing them to land without stepping or hopping.

4. The men's pommel horse tends to be extremely dull, despite the great skill involved, because they just go around and around. I propose that the routine be performed on an actual horse as it gallops around the arena.

5. The swimsuits of the synchronized divers are identical; they should be mirror images, with the design of one on the opposite side as the design of the other, so it looks like one diver is a mirror image of the other. Also, the divers should have to be twins. Actually, it's too easy to synchronize with one other diver. The event should involve eight divers going simultaneously, preferably octuplets.

6. No one actually swims the butterfly, so why is it an event? It should be replaced with the dog paddle. That may sound ridiculous, but it's no more ridiculous than race walking. I mean really, walking? In real life, if you're in a hurry, no matter how fast you can walk you'll be left in the dust of people who have enough sense to run.

7. There's no way of knowing who wins a point in fencing unless you just watch the electronic light come on. The only way the actual fencing will ever be worth watching is if they use real swords and fight to the death.

8. There should be a coxswain in every scull, even the singles, and the coxswains should all be equipped with those huge drums like in Ben Hur, to help the rowers get the rhythm.

9. Anyone can hit a stationary target. Archery contestants should line up along the track. In the early heats they shoot at the race walkers and in the finals they shoot at the 100-meter dashers. It wouldn't be dangerous to the runners because they would wear plastic targets and the arrows would have suction cup tips.

10. I don't think it's right that they have cameras in the ladies' showers at the diving venue. One of these days someone's gonna do her last dive and absent-mindedly take off her suit before showering.

12. It would be easier for the spectators in the back rows to see the balance beam competition if the beam were about forty feet high.

13. Water polo would be much more exciting if the participants were in those bumper boats, like they have at the state fair. I can't believe no one else has thought of that one.

14. Chariot races, but instead of horses, cheetahs.

15. Instead of swimming pools, the divers should dive into those containers of plastic balls like they have at Chucky Cheese. Make the balls transparent so the below-surface cameras can see the divers' entries. It would be like a kaleidoscope.
Posted by Evil Editor at 9:35 AM