In the past, our annual Guess the Plot Quizzes have appeared in December, when submissions tend to dwindle, but as we're down to 0 openings and 1 query (still needing fake plots) in the queues, and as it's Halloween week and most of the GTP Quizzes involve creatures of the night it's the perfect time for . . . 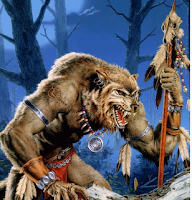 The following plots involving were-animals appeared in the Guess the Plot feature during the past year. But four of them turned out to be the actual plots of minions' novels. Which ones?


1. Someone is murdering teens in nearby towns, and suspicion falls upon Lily's school, where all the students are super-powered freaks. If Lily can't lead her team of future X-Men in solving the murders, the school may close. And Lily will never get a date with that really hot werewolf.

3. Just as vampires overrun Valparaiso, a massive storm cuts it off from the outside world. Wolfsbane Joe, stuck in town after his werecheetah wife ran off with a waiter, is Valparaiso's only hope. But can one drunken ex-prizefighter werewolf take on a vampire army?

4. Chased by a werewolf named Simon, Rachel, a werewolf, ends up in Morgantown where she joins a local pack of werewolves and begins to wonder if it's really that bad to be a werewolf when pretty much everyone is a werewolf.

5. Harvey Jones has seen it all: fights, murders, sex, love gone bad. But that's pretty much what you get when you run a bar that caters to vampires and werewolves. Also, a silver dagger.

6. Aimee thinks she has the perfect solution to the animal instincts that overcome her when the moon is full and she becomes a werewolf: a cabin in the wilderness, fifty miles from civilization. And it works fine until the month she arrives at the cabin to find that a scout troop has set up camp nearby. Carnage ensues.

7. When Emily goes for her jog at Dume Park, she discovers all but a single trail are closed for maintenance. Determined to get her cardio at any cost, she follows the unfamiliar trail, soon realizing that something hungrily stalks her from the bushes. Suddenly that legend of the Dume Park Werewolf doesn't seem so silly.

8. Coyotes aren't the problem; the werewolves can keep the coyote population down. No, the problem is that Jo Redfox's mother has vanished and the only person who can find her won't--unless Jo lets him screw her on the hood of her truck. Hey, that's life, at . . . Camp Coyote.

9. On Halloween night, Ashley takes a shortcut through the graveyard and gets simultaneously bitten by both a vampire and a werewolf. Crap. This is going to put a crimp in her plan to snag All-American Josh Burrell as her prom date.

10. In a land where volcanic ash has blocked out the sun, an evil overlord with the ability to turn rabbits into bloodthirsty weredingos attempts to gain dominion over the puny people. Can 16-year-old Dara and her ragtag companions thwart Gurodun before he destroys the vessels containing the essences of their abilities? Or is everyone doomed?

11. Kat's new boyfriend carries a terrible burden: he's a werewolf. Kat has her own burden: a phobia of dogs. Their families hate each other. It's like Romeo and Juliet, only with werewolves.

The actual plots are numbers:

Are you trying to get us to send you queries?