Someone wrote in recently to ask why John Grisham appeared on this blog with some frequency, and I explained that Grish is my most successful author. At least from a financial standpoint: 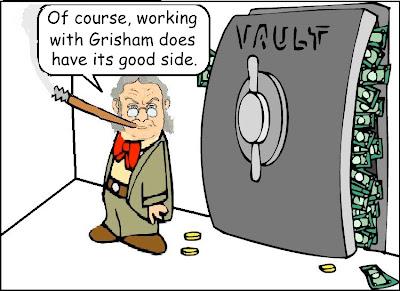 However, I thought I'd shed a little more light on the subject by delving into the archives. This scene, from 2006, describes my first meeting with Grish:


EE was dining al fresco at the Pig 'N Whistle on Hollywood Boulevard when a limo screeched to a halt. John Grisham got out and joined EE at his table. "Sorry to interrupt," Grisham said, but I've just finished my greatest novel yet, and I want it edited by the best. You can have the million-dollar advance and the royalties; I just want, for once, to get a review that doesn't pan my writing."

EE was about to respond when a bus pulled up. The doors opened, and out stepped a cute young woman with a suitcase in her hand and stars in her eyes. She spotted EE and was drawn to him like Lara Croft to a mummy. "Hi," she said. "I'm Linda Lou Johnson, from Kansas, and I'm here to become a star."

"You're in luck," EE told her. "My friend here was just leaving. And you're just what I've been looking for to play Evil Editor's love interest in Evil Editor Meets Miss Snark. Can you handle stilettos, Linda Lou?"

"Don't be silly. You'd be playing Angelina Jolie. You kill Miss Snark in the last scene, with an ice pick stiletto in the ear."

"You and she both want Evil Editor. But you don't want to share."

"Who's playing Evil Editor in this movie?"

"Then it's settled," Evil Editor said. "Now let's get up to my hotel suite. George won't be here for another week, so you'll have to rehearse with me. You don't have a problem with nude scenes, do you?"

And here are a few of the many Grisham cartoons that have appeared over the years:

And finally, here's a piece that appeared not too long ago, in which the EE/Grisham partnership nearly dissolved:


Sorry Grish, but I have to let you go.

I mean, you'll have to find a new editor.

You've got it backwards, Grish. Have you forgotten the days when no editor would read past page 1 of your manuscripts? Have you forgotten that your first novel, A Time to Kill, edited by some broad who was biding her time till she could start her own literary agency, bombed like an unattended car in an al Qaida-infested neighborhood? How your second novel, The Firm, edited by Yours Truly, hit the bestseller list faster than James Gandolfini hits the buffet at Mama Leone's? Not to mention that the movie made Tom Cruise a household name. Why, my advice to start all your novels with the word "The" alone has made you half a billion dollars. Or hadn't you noticed that every time you write one that doesn't start with "The," it tanks?

Okay, but we're a team. We need each other. My name and the word "The" guarantee millions of books sold.

I'm thinking of giving the word "The" to one of my other authors. One who's not so full of himself.

But readers love my--

Look Grish, people read your books only because you show lawyers to be exactly like they are: evil, cruel, heartless . . . It's the same reason people read my blog: because every time they get rejected, they think--correctly--that agents and editors are the bottom feeders of the publishing industry, and the blog reinforces that belief. It's comforting to know it's not their fault, it's the fault of the bouncer who won't let them in the door.

You'll be fine. There are a dozen titles you haven't used yet. The Attorney, The Tort, The Bailiff . . . Hell, you haven't even used The Trial.

Sure, I can slap a good title on a turd and sell five million books, but without your input I'll lose the respect of the literary world, EE.

True. Okay, tell you what, I'm tired of your agent getting fifteen percent for doing less than nothing while I work my ass off on salary. We'll cut out the middle man. From now on you get fifteen percent, and I get the rest. Deal?

To be honest, I always thought 'John Grisham' was one of those ultra-powerful bac 'n' grime bustin' lavatory cleaners.

Loved by housewives the US over, John Grish 'Em never fails to sort out "the pan" with its unique blend of bleaching action, abrasive clout and germ blitzing wherewithal.

"Lavatory or latrine? Why wish for clean when you can GRISH for sheen? Complete with handy propellant action even I can pump!"

In surveys, 99% of Americsn housewives agreed:

"I'd rather hose down my lavatory with a gallon of John Grish 'Em than sit on it in the throes of constipation reading his equally turgid prose."

A ROSEANNE REFERENCE? How did I miss this?!

@ Whirlochre
Hmmm, I'm getting a vague feeling -perhaps you can call me psychic - that Mr Grisham didn't make your top 10 fave authors list this year.