I knew I was lit when I cracked my eyes. Me, Steve Shamus, private eye, lit to the gills on giggle juice. No... I actually was lit, like I was caught in the high beams of every Buick driven by every two-bit mug in H-burg. How those Buicks got in my fifth floor office I don't know. But no, it was just one light: a chrome Rayovac, slender fingers grasping it lovingly. I thought about something else I'd like to have grasped like that. The ceiling bulb flickered on; a hand was on the light switch and another held a .38 aimed at my ticker. Yeah, I know - that's three hands. But that's what I liked about Bonnie the Hat: she was different.

She was the canary who sang in cheap dives for tips, shots and butts. Slip her a pack of Luckies and it'd be "Is You Is or Is You Ain't My Baby" until your ears bled. But the doll was a looker, and so she did, glomming me then shooting me that smile; suddenly a million violins exploded in my head. No... I'd left the radio on.

"Hand over the jack, gumshoe," she snarled.

"It's Steve, not Jack," I reminded her. How could she forget, after that night in the alley with the handcuffs, nylons and whipped cream? That reminded me to get myself a new pair; I always got a run in them after the rough stuff.

"Cut the gab and make with the cabbage," she hissed. "Toss me the lettuce."

I was onto her game and let her know it. "Sorry sweetheart, your salad days are over." A quick slug in my kisser with the butt end of her .38 left me with two less teeth but hope in my heart; maybe she remembered that night in the alley after all.

Then the world turned upside down; the door burst open and like the morning after a twelve tamale dinner in a cheap Mexican restaurant he showed up in my life again: Shades Blanchard.

He was the only guy I knew who, instead of sunglasses, wore miniature window shades. He pulled the cords and they rolled up neatly above his monobrow, revealing two shiners. "Shades," I said, "What happened?"

"Walked into a door," he claimed.

"It was French doors. Who's the dame?"

"How come you ain't wearin' no hat?" Shades asked her.

"None a yer beeswax," Bonnie the Hat told him. 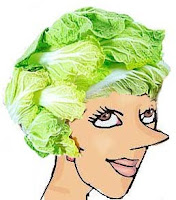 She turned back to me and said, "Last chance, dick, hand over the cabbage or I plug the both of youse."

I tossed it over. She put it on and said, "Thank God. I feel naked without a hat, and mine's in the dry cleaners."


Someone elbowed me in the ribs, making me feel like that night in the alley—trapped and in pain.

"Give her the damn lettuce," a voice snarled, sounding like a Packard on steroids. I looked up and it was Shades, staring down at me, as usual. He looked as shiny as a Lincoln penny in his new uniform.

"Sure, sure, Shades," I mumbled. I was just too high to argue. Then I looked at the woman who had somehow managed to hit me over a counter and a sneeze shield. "Provolone?"

There are a few too many jokes for a satire of the hard-boiled detective genre. I'd lose "I thought about something else I'd like to have grasped like that." and "No... I'd left the radio on."

Also, I'd start: I was caught in the high beams... and dump everything that precedes it.

It's funnier if it sounds serious. If it sounds like it's trying to be funny it's less funny. Although I'd keep the three hands line.

I know this feeling. Some characters just want to jump off the page and write themselves into grand and glorious things.
Not that there aren't real world characters this outrageous. The latest is a rugby player who got staggeringly drunk and did things I can't even say... (look up Monaghan)

I'm with EE. Cool this down a bit.

I agree, it feels like it's trying too hard. The best hardboiled detective type lines are the ones that slide effortlessly into the flow of the narrative. I got really lost at "But the doll was a looker ... "

And perhaps I've just been sensitized by too many painful dental procedures, but getting two teeth knocked out would be a painful experience, no? Feels way too glossed over.

The three arms line is great.

The metaphors idioms and misdirections are so thick it's hard to follow what's going on. Sounds like you're making fun of "Guy Noir", possibly without realizing Guy Noir was Garrison Keiler making fun of someone else.

A good noir satire is Dead Men Don't Wear Plaid, with Steve Martin, which cleverly slips scenes from earlier noirs into the film. And gets funnier every time I see it.

Yeah, too much funny is slowing down the story, but actually the problem I had with it was that I often couldn't figure out what was going on. I'm picturing eyeballs with cracks in them, and handcuffs with a run in them.

Funny/satire is good. Overdone funny/satire is like Harvard Lampoon's Bored of the Rings... when everything's a joke, nothing's serious enough for the reader to get invested in.

Count me as another one who couldn't figure out what was going on. If you don't rewrite this, you need you to draw me a picture.

Thanks for the feedback, EE and minions. Love the graphic.