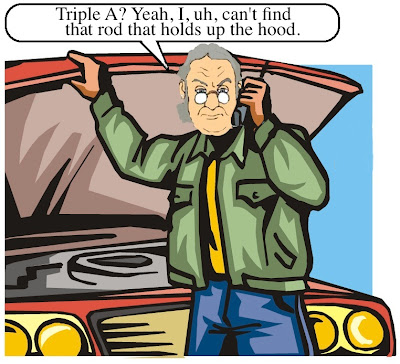 
Triple A? Yeah, I, uh, put a body in the engine compartment by mistake... --anon

I can too pull off mom jeans!--Ellie

I thought this was the trunk. --anon.

Once upon a long time ago, I drove a a Mazda RX2 with the rotary engine. It had two rotors that each had three chambers and yes, it did rotate to make the car move. The engine was in the front of the car with the hood opening "bonnet" style (that is from the windshield) and not from the front grill.

It used to burn oil like a son-of-a-bitch (as the old saying goes). I used to get my jollies asking attendants to check the oil... (bad boy, bad boy)

Gas station attendants (which we no longer have) used to look in my trunk to find the engine. Not there.

Then, they would try to lift the front of the car where the grill was and I would shake my head no. Then I would pop the bonnet and finally they would open the hood from the proper side. It was held up by a rod that lifted up from the wipers. I think that Mazda used a piano hinge to hold the bonnet on.

After that, It had two distributors with lots of wires sticking up -- one distributor for each rotor and four spark plugs sticking out of one side of the engine. That got stares and very puzzled looks. The engine block was only about 20 inches high, twelve inches wide and six inches deep. Tiny bugger.

One poor soul pulled out the dipstick wiped it and put it in again and then took it out only to show me the oily end... He asked if I needed oil. He never saw anything like it and was unsure if there was even oil on that dipstick because there was another for brake fluid and yet a third for transmission fluid.

Endless pleasure at someone else's bewilderment. I had such fun (bad karma, bad karma)...

I got rid of the car when the rust got so bad it shut down the fuel pump and tail lights and I had to have it towed away. All the winter salt around here created a rust bucket.

So now (nearly 35 years later) I look into engines compartments and wonder what I see that looks familiar. The answer is not much and if it stops, I reach for the Triple A card and call a tow truck.