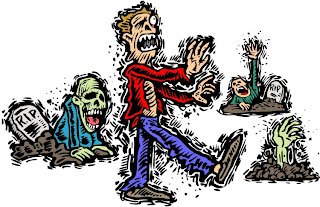 
As they so often do, zombies have made it into several Guess the Plot sets in the past year. But three of the plots below turned out to be the actual plots of books. Which ones? Correct answers are at the bottom of the post.


1. On a dare, Ted crossed the line, but now he's dead and an army of zombies is determined to make him their newest recruit. Can Bella LaBod rescue her lover from a fate worse than death? And will she be able to come back to the land of the living after she's ventured beyond the . . . Dead Line?

2. Zombie alligators crawl from their swamps to the subways of New York, consuming everyone in their path. They're the minions of Dr. Hannah Wild. She's taking over the world. Meanwhile, a daring team of meteorologists and astronauts struggle to bring a great blizzard from Winnipeg that will turn the monsters to ice.

3. Literary Fiction author Bromeliad Fauntleroy has written the definitive novel of male ennui during the teen angst years. However, to do so, she had to invoke the ghost of King Tut. Now she's stuck with a dusty, moldy zombie with delusions of Godhood and immortality. Can she send Tut back or will the next Empire be governed by the boy-king . . . and his blushing new bride?

4. Tax collector Ryan Conner doesn't know why no one in Colmera Springs ever pays taxes, but he's going to put a stop to it, even if it means throwing the whole town into jail. Maybe Conner would have thought twice if he'd known the truth: that the residents of Colmera Springs are all . . . zombies!

5. An epidemic of terrible disease spreads across North America. For three days, patients seem to have influenza. On day four they become zombies. But everyone at the Happy Hills Organic Herb Farm and Goat Dairy collective commune in Tennessee stays healthy. President Hannah Jones reads the Top Secret report from the CDC and wonders: could it really be -- the garlic?

6. Memoirs of a career fireman, focusing on the numerous people who've died in his arms at the scenes of vehicle accidents and house fires. Also, a dead man opens his eyes: resurrection or zombie?

7. In the city of Necropolis, nothing is as it seems. Zombies roam the streets, vampires rule the night, and werewolves make travel dangerous. When the new head of the NRA is found in rigor clutching his rifle in his cold, dead hands, Detective Paul Fontane knows he's looking at a murder. Figuring out the suspect should be simple, since the victim is also missing his brains. But getting around the People for the Ethical Treatment of Zombies protesters to get a DNA sample won't be easy.

8. When evil scientist Ray Winegast accidentally infects himself with homemade zombie microbes and starts an epidemic, it's up to Thor Jones and Bongo Mugwump to save voluptuous Screaming Mimi from the roof of Virus Central before the US Air Force flattens Pittsburgh.

9. The instant longshoreman Joe Dentmore saw the dude and the dame in the white coats running toward his forklift, he figured -- mad scientists! And how right he was! They're attempting to take over the world with the aid of a woman whose outfits scandalously fall off at critical moments. Can Joe stop them, or must he call in Team X97Z -- the zombie axemen?

10. Sean and Brendan, a pair of exchange students, try to join Sigma Xi. Blackballed for being geeks, they seek revenge in a Guinness-fueled killing spree, only to find that Sigma Xi is home to a pack of zombies. Joined by fellow losers, they form their own fraternity, dedicated to destroying the zombies before the Physics Department becomes a brains buffet.

11. The love letters were anonymous, but the envelopes had return addresses. Lonely spinster Mildred Marshall decides to investigate, but when she discovers that the address is a local graveyard she must decide: was it was all a prank, or does she have a secret admirer who happens to be a zombie?

12. Queen Voula rules with an iron fist, especially when it comes to her servants. But that doesn't keep Linea, the zombie maid from shirking her duties to be with Leo. When Leo dies and becomes a zombie, can he and Linea kill Voula before she destroys their souls?

13. Morris the Cat meets the zombies in this action packed thriller of kitty redemption. Does Morris have enough lives left to defeat the zombie master?


Zombie fanatics may click on the "Zombie Guess the Plot Quizzes" label below to view the previous quizzes.

I only got one correct. Guess I'd better brush up on my zombie lit.

Thank you for entertaining us, EE!

#1 sounds like a short story. I guessed them all wrong. Ooops.

Yeah, I didn't get any right, either.

What, no zombie meerkats™?