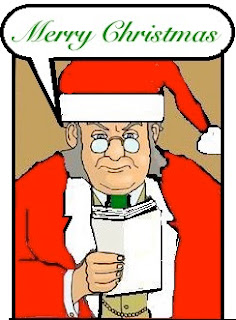 1. In an epic tag team match between the ghosts of Jacob Marley, Chrsitmas Past, Christmas Present, and Christmas Yet to Come, Scrooge must declare a winner in time to save Tiny Tim . . . and Christmas.

2. Santa Claus is mistreating his elves and reindeer, and it's up to the goat-demon Krampus to set things right by destroying Santa's kingdom. If it takes bloodshed and a few Christmases without toys, so be it.

3. A 400-page book detailing the history of the candy cane. Includes chapters on the stripes and what they represent, favorite flavors of celebrities, and theories on why there is a hook on the end.

4. For the office Christmas party, everyone brings corkscrews and no one brings champagne. Kelly, Bernard's secret crush, kisses Mike, the office nerd, who got the largest bonus check. Holiday cheer does not ensue.

5. When the three wise men arrive in Bethlehem to pay tribute to the newborn king, they are horrified to find he's got horns and cloven hooves. Even worse, there's no room for them at the inn. They can't go home with this story, so they agree on alternative facts, never dreaming the ridiculous tale they concoct will be told for thousands of years.

6. It's May. Santa and Mrs. Claus are on a cruise. The reindeer have scattered, enjoying the mating season. Only the elves remain, toiling for long hours in their sweatshops, manufacturing yet more toys while the unsupervised elf children turn delinquent. But one elf has had enough. This year, he vows, the kids will be making toys for us.

When Christmas goat-demon Krampus argues against how King Santa disciplines his deer, he never expected to  [You've changed from present tense to past tense, and the first sentence isn't even over.] get exiled in return. After spending a century in Anarctica, Krampus comes back to the North Pole at the king's request. However, the Christmas town isn't as jolly as it used to be.

Once Krampus witnesses the cruelty of his old companion's monarchy, he takes matters into his own hand [hands]. Having watched the elves and deer work themselves to death in fear of King Santa's wrath, the goat-demon vows to destroy Santa Clause's [Claus's] kingdom. He shares his plans with childhood friends Vanilla and Simon, [Are Vanilla and Simon also goat-demons? If not, what kind of parents let their kids be friends with a goat-demon?] who join in after much consideration. However, bloodshed on both sides awaits as they get closer to their goal. [The word "however" makes sense there only if we believe the goal is a peaceful transition of power. But the plan is to destroy Santa's kingdom, so we're already expecting massive bloodshed.] [If there's a war, do Santa's elves have real guns or just toys?]

I am an Undergraduate student majoring in Global Studues with a concentration in Media, Culture and Art. I'm also aiming for a Certificate in Creative Writing to hone my skills and gain more experience. I make sure every book I write is thoroughly critiqued on community sites such as Scribophile and Wattpad and always look for ways to improve. [The person to whom you're writing doesn't care about any of that.]

The first ten pages are below based on your submission guidelines.

Evil Jr. was reading Goosebumps when he was a little kid. If the level of violence is no greater than that in Goosebumps, I'd call this Middle Grade. A kid who can handle Harry Potter can handle a Santa who mistreats his elves and reindeer. New Adult is for college-age readers. The fact that some college-age readers would enjoy this book isn't relevant. Adults enjoy Harry Potter, but they find it shelved with the kids' books. Tip for deciding if your book is NA: check to see if Santa Claus is one of your main characters. If so, odds are it isn't.

Why did the king request that Krampus return to the North Pole? If Santa had the power to exile Krampus to Antarctica once, why can't he do so again?

How come a goat-demon is the hero? Most readers don't think of demons as benevolent, and the character Krampus isn't normally depicted as a good guy. If this is a retelling of a story from the POV of the villain, I'd state that up front.

You have room to tell us more of the plot. This is mostly the setup: Krampus, after a century in exile, is called to the North Pole by Santa (Why?) and vows to take revenge and right some wrongs. And....? What's his plan? What goes wrong? What happens if he fails/succeeds?

Antartica <- note the extra t. This has enough typos (or grammar/spelling mistakes) for me to worry about the quality of the manuscript.

NA is a fairly new category, but from what I've seen, the word counts expected are similar to YA, which means this is a bit on the slim side.

I realize repeating your title can be one of those sales tactic things, but twice in a two sentence paragraph?

Ugh, I had a hard time with comparisons because I barely know any Christmas-based horror novels. Back to goodreads!
Ah, Santa's the antagonist and Krampus is the anti-hero.
Vanilla's an elf with longevity and Simon is a reindeer Santa raised with magic to make him (and the other deer) live longer. I thought putting their respective species would make the sentence too long, but I can just split it.

Considering there isn't a "Christmas horror novel" shelf at either the bookstore or the library, I think you may be trying to be too specific. Comp titles seem to exist for the purpose of figuring out whether there's a market for the book, and if so who they are. Maybe try for a horror comp for the same age range and the same level of horror and a comp that proves readers in your target age range want to read books about someone like Santa Claus then phrase as X meets Y. You might also want to say your book is NA horror or NA dark fantasy.

The respective species of Vanilla and Simon aren't as important as mentioning whether they bring to the plot something other than bleed-able bodies.