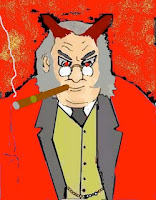 The following Guess the Plots have appeared since the last time we did a Satan quiz a few years ago. Four of them turned out to be the actual plots of minions' novels. Which four?


1. After Adam and Eve screw up, God replaces them with a more self-reliant pair. As Eden is overrun by rodent-spawn, God realizes He's just been conned . . . by Satan.

2. Mort Rimby, ace reporter, agrees to run a newspaper for Satan. But all Hell breaks loose when Mort discovers that Satan's wife Marge is the real power behind the pitchfork -- and Marge has the hots for Mort.

3. Wannabe artist Nigel was never as talented as his brother Simon. In desperation he cuts a deal with Satan, selling his soul in return for the ability to paint with the Devil's own oils. He begins work on a picture he knows will be a masterpiece, not realizing that he is about to unleash Armageddon.

4. First Maya goes to her husband's funeral, but there's no body in the casket. Then her new boyfriend turns out to be a rogue FBI agent hunting her "dead" husband, whose name "just happens" to be an anagram of Evil Satan. It's all par for the course in a town where . . . Nothing is what it seems.

5. Elke has always been unattractive, so when Satan offers to make her beautiful if she'll burn down a nunnery, she agrees. Hey, she's not even Catholic. But when she discovers that her long-lost twin sister is living in the nunnery, will she go through with the deal or try to con Satan into letting her renege?

6. Holy visions appearing in the sky. Miraculous cures. Global warming eliminated. Turns out, Satan's teenage daughter is going through a rebellious phase. But when her good deeds actually earn her a ticket to the Pearly Gates, can she win the cute angel's heart before Heaven changes its mind?

7. Evangeline is banished to hell for something she didn't do, as God screws up for the first time ever. There, she is nominated to become the next Satan. Hey, it's better than working at Starbucks.

8. After her terrible experiences with the first nine grades of sin, Gladys decides she's had enough and converts to atheism. But can she really get off that easy? Not if Satan has anything to say about it.

9. Despite having his own gallery in the best part of Manhattan, Satan's work isn't selling. He hires Jane Dumont to help with this marketing crisis, unaware she is an angel in disguise on a secret mission to inspire him to redeem himself.

10. Angel sees dead people. She thought they were ghosts, but it turns out what she's been seeing are demons, and they force her to choose eternal damnation in Satan's realm or insanity. Are the living conditions better in hell or an asylum?

11. When Hannah first meets her new college roommate, Giselle strikes her as a little odd. Nice enough, but a trifle . . . off. And that's before Hannah notices the horns, the tail, and the smoking cloven hoofprints that Giselle leaves on the carpet.

12. Executed serial killer Ed Parker Hull, awaiting his afterlife fate, finds both Satan and Adramelech vying for his soul. One he's never heard of, the other has a pretty bad reputation. Is it better to sign on with . . . The Devil You Know?

13. Michael wants to be one of the glamorous fashion designers he loves, so when Satan offers him a fashion line of his own in return for his soul, he jumps at the chance. He never thought Satan would stick him with a line of plus-size clothes for a cheap catalog catering to trailer park clientele. Is there any way to cut the thread?

14. When Jason attempts an escape from prison, he is hit by a runaway golf cart. In limbo he meets Satan who offers him a deal; eat seven people who embody the seven deadly sins, or rot with him in hell. Jason’s a vegan. Will he accept the deal or barter for a vegetarian alternative?

15. When Petunia's art teacher vanishes, she discovers he sold his soul to Satan 700 years ago for the ability to paint . . . and now he wants Petunia to trade her soul for his so he can get back to his studio.

Hell, I've put in for so many Oscars, Emmys, Nobel prizes and Olympic medals over the years — and all for precisely zilch.

Great to have some recognition, for once!!

Did I buy your soul? I don't remember. Anyways, if you're game I'll do the Satan deal for free just this once.

All I ask is that you take a look at my manuscript.

It would make a great Brad Pitt film, if that helps.