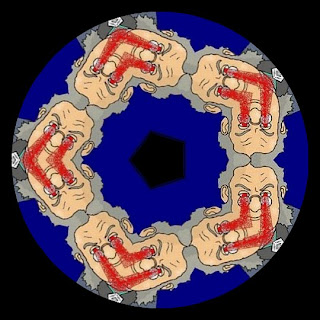 2. Follow the adventures of Kally as she changes grass to red, the sky to green and all people to the same color – purple.

3. Lucy can mesmerize with her kaleidoscope eyes. They spin around and flash all sorts of colors until her victim is under her control. Can Eric gather enough diamonds to fulfill the prophesy to banish her into the sky before she takes over?

4. Alia's life is good, but maybe she's just looking at the world through kaleidoscopic glasses. Her stepfather makes a deal with the devil: In return for movie stardom, he sticks Alia with a constant companion--the soul of a beggar boy named Raju. Which would be unbearable enough even if Raju didn't keep committing murder just to get her attention.

5. A short story collection with a cast of weirdos you'd run away from if you saw them coming down the street, especially if you were looking at them through a kaleidoscope. Funny, touching, and above all literary.

6. Betty and her brother Clyde discover a kaleidoscope in an old trunk at their grandfather’s house. Clyde looks through the eyepiece and sees their grandma who went missing twenty-five years ago. But when Betty takes her turn, the fireworks really begin.

Alia is seventeen and just went from boarding school orphan to unlucky contestant no 1 in a house of terror. [She's not really a contestant, you're speaking metaphorically. To be consistent, she should be a resident in a house of terror or a contestant on House of Terror (which readers will assume to be a metaphorical game show or maybe a reality show).] Her stepfather Khanna may appear to be an invincible Bollywood superstar but the thing about messing with the dark side is it messes right back with you. Which may explain why mother is in a perpetual fugue and why Alia is in the grip of a haunting so bizarre, she hardly knows what to believe any more. [It's too vague to explain any of that. And "that" is pretty vague itself.] [According to sentence 2, if Khanna messed with the dark side, the dark side should be messing with Khanna, not Alia and her mother.]

What she would like very much to believe is that she has a shot at a normal life. Particularly when she’s playing anonymous new girl at Mumbai’s most elite institution St Xavier’s. Soon, part-time model and full-time decent guy Sid arrives to join her literature class and Alia can ask for no more.

But karma can be so unreasonable. Missing objects, Post-its in childlike handwriting, jealous apparitions and repressed memories pull Alia back from college to what she’s doing her best to ignore. Khanna may have been unclear about payback when he asked a streetside tantric, a ‘magic man’, to give him super-stardom. [Maybe it was the tantric who was unclear. That's usually the way these deals work. The tantric says "But wait, there's more: Your stepdaughter shall find a lifetime of companionship," not specifying that it's with a murderous stalker.] As a result, a little shaitan, the soul of beggar boy Raju, walks among them and will stop at nothing to get Alia’s attention – not even murder. [I think "including murder" would be clearer.]

With Raju in charge now Alia must assume responsibility for her stepfather’s actions fully aware that the consequences will be unpitying. [How did Raju get to be in charge, why does that make Alia responsible for Khanna's actions, and what actions and consequences are we talking about?]

At 90,000 words, Kaleidoscope is fast-paced and funny, a novel of supernatural suspense and growing-up. It is a dark [and yet funny?] look at how sometimes, what can’t be beaten must be joined.

Seventeen-year-old Alia would like to believe she has a shot at a normal life. She’s through with boarding school and is playing anonymous new girl at Mumbai’s most elite institution, St Xavier’s. And when part-time model and full-time decent guy Sid joins her literature class, Alia can ask for no more. [Is it okay to say Alia thinks she's found Nirvana? I don't want to suggest something that will cause Hindu fundamentalists to slap a death sentence on you.]

But karma can be so unreasonable. Alia's stepfather has made a deal with a tantric--a "magic man." In return for Bollywood superstardom, he has inadvertently placed Alia in the grip of a bizarre haunting. Seems a little shaitan--the soul of beggar boy Raju--is obsessed with Alia, and will stop at nothing to get her attention. Including murder.


Now dump that last plot paragraph and tell us what's at stake and what Alia plans to do about her situation.
Posted by Evil Editor at 9:14 AM

Oh man, this query is awful but the book sounds really promising. I hope you take EE's advice. A well-structured query with concrete details would really let your interesting elements shine. Good luck!

I had the hardest time reading this query even having deleted EE's comments. It's like one sentence doesn't connect with the next. It's described as a tale of growing up but there's some sort of haunting and deal with the devil which gives it a fantastical element...and you need to be really clear when writing fantasy because people take things (like contestant no 1 in a house of terror) literally.

The post it notes in childhood writing really hooked me and this certainly has potential. I'd take EE's advice with the reorg and really drive home what's at stake in that final paragraph to hook us.

First I get the impression that Alia craves sanity, normalcy, real parents, and escape from the dark side. Then the Cute New Boy appears and . . . [chirpy voice] who could ask for more?! (Or is that supposed to be the "funny" you claim is in the book?)

It took me three close reads to figure out (I think) the whole trail of messing with the dark side and the dark side's messing back, and it came out white random and un-karma-like if I understand karma.

You claim dark and funny, but I don't see it in the query. I think when you redo it, we need to get a sense of your writing, your plotting, and your characterizations.

I really like the sound of the story - insofar as I can guess at it through the query.
One small note to add - with the Bollywood setting, saying that Alia 'plays the part' of a schoolgirl is just confusing. I get that you're playing with the idea of roles and life as performance, but maybe the query isn't the place to do that?

See, this is my issue with hooks. Queriers are encouraged to sum up the story in the first paragraph and then tell us everything all over again. It almost never works (for me), and it causes a lot of time-frame issues. Here we're told Alia is already in the (figurative) house of terror, then we immediately go back in time to the point before all the crazy happens.

The good news is I think there's a very entertaining story here. I love the idea of the stepfather making a deal to become a Bollywood star and I genuinely want to see what happens next. I think EEs retructuring is all kinds of awesome. I'd love to read the next version of this.

Call me old-fashioned, but "fast-paced and funny" is the kind of thing you should let other people say about your book rather than saying it yourself. It's a bit like telling your boyfriend you're beautiful.

Your job is just to be fast-paced and funny, and let them figure it out.

EE, at least in Buddhism, Nirvana is extinction of the self. Teh google is suggesting it's something similar in Hinduism.

Dictionary.com has this definition:


3.
a place or state characterized by freedom from or oblivion to pain, worry, and the external world.

Hmmm, a reality show called House of Terror might just work for those who thought the Big Brother contestants got off too lightly!

I agree that the plot has potential, but the query's not carrying it well.

But there was something that her step-father Khanna forgot to mention. In exchange for Bollywood super-stardom, he sold her soul to the devil. As a consequence, Alia is in the grip of a terrifying haunting. Bizarre messages on post-it notes start to appear. Objects go missing, and she experiences terrifying flash-backs and hallucinations.

A shaitan, the spirit of beggar-boy Raju starts to take over Alia's life, possessing her and commititng terrifying murders to subdue any thought of rebellion. Alia must find the magical kaleidoscope to defeat him."

Ok, I have no idea what the role of the Kaleidoscope may be, but I'm intrigued by the title. Particularly as it's the working title of one of my WIPs! Grr!

So these Hindus are using the American definition of karma? RLY?