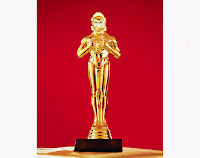 Each year Evil Editor's Academy of Motionless Pictures honors the year's best films. Once again this year, at the request of the Hollywood stars who are obligated to attend the Oscar show and whined like a car whose battery isn't quite dead but isn't powerful enough to start the engine when we held the Evies at the same time as the Oscars in year 1, the Evie Awards are being presented a week earlier than the Oscars. And once again, unlike the Oscars, which show an occasional thirty-second snippet from a film, we show the entire film and still manage to complete the entire program in about twenty minutes. And the Evies go to . . .

Wow, Khazar, I came to talk about the exact same thing.

Holy cow! Nice series. Where's the ending where they all stand on the stage singing together?