SYNOPSIS - JOSHUA AND THE FANTASTIC FOREST

If you haven't read the query for this novel, which was posted Friday the 25th, and you want to play Guess the Plot, scroll down now, as this synopsis gives away the plot. Of course, if you want to be able to say you got a Guess the Plot right for a change, read on.

Twelve-year-old Joshua Cooper finds out a walk in the woods can change his life forever with one chance meeting – or end it on a battlefield.

Bored as the new kid in town, he is desperate for friends and fun. He finds adventure in the mountain forest above his home when he encounters talking animals created from the DNA of highly-evolved animals that roamed the earth long ago and died out.

They share the story of their accidental transformation into prehistoric animals of amazing strength, senses and reason that lived on earth millions of years ago [That's pretty much the definition of "prehistoric."] and were blasted away by a siege of meteorites that left almost no trace behind. Almost.

When bumbling, old Mr. Bimble loses his walking stick it’s struck by lightning in the forest and explodes into shimmering dust that changes every creature it touches into the animals of long ago. What made his walking stick so special? It was carved from wood he dug up as a boy that carried the DNA of these ancient animals and their powers surged through him whenever he grasped it. [The first sentence of that paragraph needs to be in past tense. Otherwise it sounds like you're moving on to something new, rather than reporting the story the animals shared. In fact, you might combine the 2nd and 3rd paragraphs into:

They share the story of their accidental transformation: It seems when bumbling old Mr. Bimble lost his walking stick it was struck by lightning in the forest and exploded into shimmering dust that changed every creature it touched into prehistoric animals of amazing strength, senses and reason.]

Bound now with their new powers, these animals also carry the memories of the ancient ones and know [that] not all were decent and wise. [They know] within some [of them] lurked dark urges to plunder and conquer their own. Joshua and his friends wonder, could there be others like that now? All of this is forgotten in the idyllic days that follow as Joshua spends them soaring over the forest on a magnificent bald eagle, playing tag in the meadow with deer, [When you play tag with deer, you're pretty much always "it."] racing through the woods hanging onto the scruff of a mighty bear and sharing fireside tales with his best friend, a beaver. [Eagle, deer, bear, beaver? These are the highly evolved animals that lived in prehistoric times?]

Joshua realizes he can’t keep the secret of the animals to himself when he encounters Mr. Bimble searching for his lost walking stick [If you need a walking stick, it seems like you'd notice the moment you didn't have it, and not walk so far away from where you last had it that you have to go searching for it.] and Matt, a school bully, heading up the mountain to shoot off fireworks in the woods. He rescues them from a forest sinkhole and risks sharing the secret of the animals. The unlikely trio becomes friends and vows to protect their secret of their forest friends no matter what the consequence. [If I had wanted to keep the animals' secret, a bully is the last person I'd reveal it to. You can't trust a bully not to come back with nets and cages and trucks to capture the animals and start a circus.]

Joshua discovers Mr. Bimble is dying from cancer and with the help of his friends he devises a special magic DNA brew in the hopes to cure him with the animal powers. [Why is the DNA concoction magic? If magic exists, why not make the cancer cure from something more easily obtained than DNA? Peach pits, for instance?] They have no idea one of their own is creating his own DNA concoction, only not to cure – to create and conquer.

When a power-hungry fox carrying the dark seed of the prehistoric animals secretly transforms thousands of animals into his allies to rule the forest with his DNA, [My college molecular biology book didn't have this many DNA references.] Joshua must find a way to save his captured forest friends and stop the fox.

He rallies his comrades to raise their own army and build an arsenal of weapons to defend themselves in the battle of their lives. When Joshua leads his friends in bloody war against the evil animal hoard [horde] he is struck down near death and it is up to his friends to save him.

Victorious in battle, Joshua and his friends share a winter of peace. He is relieved to get back to the business of just being a boy. When spring blooms Mr. Bimble (completely cured of cancer by the magic brew) is invited [By whom?] to fly off to another secret place of fantastic animals deep in the South American jungle. He rises up on the back of his friend, the great eagle, waving goodbye to all in a shimmer of golden sun – to where they might never know. But one thing Joshua knows for sure, it will be the adventure of a lifetime. [And you can experience it by watching the movie Up.] 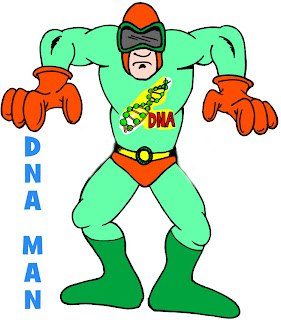 I'm willing to buy the lightning strike release of DNA transforming the animals, which is quite generous of me, but the idea of a kid and a fox (even a brilliant fox) whipping up DNA concoctions to cure cancer and transform animals?

I'm not crazy about DNA being behind the animals' transformation and the fox's scheme, and the kid's cancer cure. How about some variety? Unless DNA Man is in this book, someone in it oughta be able to accomplish something without using DNA. One begins to think if Josh had a flat tire on his bike he'd use DNA to fix it.

I'd rather hear about how Joshua was victorious in battle than about a winter of peace followed by Mr. Bimble flying south in the spring. What are Joshua's side's weapons? And don't say guns that shoot DNA.

Is it the animals who tell Joshua about the lightning striking the cane? Because I don't see how they would know lightning had struck the cane if they didn't exist until after the DNA dust touched them.
Posted by Evil Editor at 9:03 AM

The DNA/magic mix is like a Christmas story that has both Baby Jesus AND Santa Claus.

Like EE, I am willing to suspend disbelief when the author draws me into a world where magic and science are consistent. But if you use well-known science and twist it as far it's twisted here -- yes, even for MG; actually ESPECIALLY for MG as kids will be your sharpest critics -- then I just can't suspend far enough.

You're warping science to serve your story (and yes, done right, it absolutely CAN be warped by someone who has a thorough understanding of how it works in the first place. Like, you know, DNA Man.) In this instance, I think you'd be better served referring to your version of "DNA" as something along the mystical lines of "animal spirit" or "life spirit" and imbue it with the magic qualities you need.

I'm also with EE on how you've weighted your synopsis. Setup and denouement seem to have gotten more play than the conflict. Matt appears to be a minor character who can be safely left out. And even Bimble seems to serve little purpose here.

Plus, you've got cool animals that can speak, but they're all kind of lumped together as J's "friends". Is there one you can pull out that will give the reader someone else they can identify with maybe?

This storyline is much easier to understand than the prior one. And there are enough interesting plot points that give me hope this is a really cool story. The problem is that there are both major and minor incongruencies with elements of the plot. With fantasy/sci fi, the readers' suspension of disbelief is already stretched thinner than with a world more like our own. Therefore other elements must not make us scratch our heads and go "huh???"

Examples:
-- EE's already mentioned the "lost walking stick" - it's not like a coin that falls out of someone's pocket. If a person is "bumbling and old" they're likely to rely on a walking stick and notice pretty quickly that it's gone.

-- Why if this magical walking stick embues Mr. Brimble with powers that "surge through him whenever he grasps it" is Mr. Brimble considered "bumbling in the first place? Your world-view logic would tend to be inconsistent.

-- The line "When...loses his walking stick it's struck" tends to have a cause effect element that isn't there. Just because it's lost in a forest it's struck by lightning? I don't get it.

-- prehistoric animals with "amazing strength, senses and reason"? Reason? I don't remember hearing of a "Reason-based" T-Rex. If these animals are mytical creatures, then say that...not prehistoric.

-- EE mentions in jest sharing he secret with a Bully. Does not compute.

-- In the "Power hungry fox" paragraph all of a sudden we have friends described as "captured friends" when there was no mention of their capture.

-- Why are they captured? If by the fox wouldn't he have just had them eaten? Why keep these humans who stand in the way of his plan hostage? Feels contrived.

Hope this helps. In a way I like that you've used elements of both Sci Fi and fantasy. I'd just be careful that the science (even for MG) is realistic so that the fiction aspect of the science really pops.

Cool it on the fancier ways of saying things, and double-check your sentence structure. Then make sure your DNA isn't this.

The query sounded like the fox was more important; this makes it sound like he's an afterthought. Tell more about him and less about flying on bald eagles (which aren't even an endangered species anymore, much less a prehistoric).

Author, just take a step back and be sure you're incorporating clearly drawn lines with your mix of magic and science.

Plus, I get that you're saying the modern animals don't revert in looks back to the early enhanced animals, but it seems others are having an issue, which generally means you need to make that a bit more clear in the synop.

I also get you're using the term "prehistoric" in its denotative/dictionary sense, which is an absolutely correct use of the term in this context. However, connotatively, the word carries around some baggage. That's good to know, because sometimes the CORRECT use of a word is still not the RIGHT use of a word, if you see the difference.

That's why it's great to have a lot of other eyes and feedback -- to make sure what's clear to you and maybe one or two others isn't tripping up a dozen other readers.