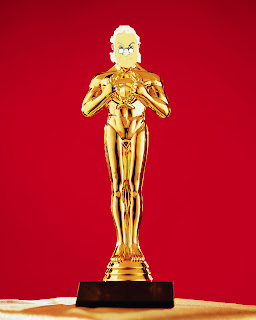 Last Year the Evies was broadcast at the same time as the Oscars, leading to many complaints, not only from people who wanted to watch both productions, but also from Hollywood stars who were nominated for Oscars and thus couldn't be at home in front of their computers (though word on the street is that most of those at the Academy Awards were keeping up with the Evies on their i-phones). So this year I scheduled the Evies before the Oscars. Happy now, Sandra, Meryl, Angelina?

I wish I could put all the winners into one film as I did last year, but several of this year's winners were produced on a computer that has been retired. So . . . the Evies go to:

Huzzah to EE and to everyone who had a hand in the making -- and breaking -- of these shorts! Next year, maybe there'll be a budget for a red carpet event. Mrs. V could do the color commentary...

I liked all of these and watched them with a good stiff martini and some canapes. Good Stuff.

However, may I point out that the Academy Awards are one week and a day away. The Oscars go off on March 7th, 2010.

BTW - Did you know they fertilize the snow before the Slalom events in the Olympics?

BTW2 - Tomorrow is the scream fest of Hockey -- Canada versus USA for GOLD... (I have divided loyalty: Lot of Pittsburgh players on various teams: Crosby, Gonchar, Fluery, Orpik, Malkin.)

Ooooh, and look over there — it's Goldie Hawn.

Ohhh! I love that Allison film. You're right - she's the best!

Just listened to Whirl's screenplay being acted out - so damn good!