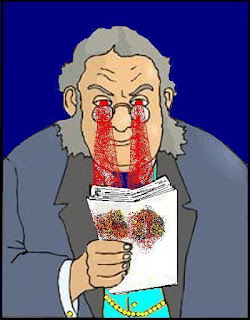 1. That's right, they really do. We sell out every show and have wild parties afterwards that leave them in a drunken stupor, the perfect condition to be snatched up and sold. And if their friends and relatives don't like it, well, they should have paid us what we agreed on.
2. Crying babies with leaky diapers. Screaming toddlers who bite. Surly teenagers. The stuff of nightmares that we, as parents, have created in our own image. What the hell have we done, and more importantly, can we ever be stopped?
3. Police. Republicans. Old white men. The Swiss. Mimes. Editors. They may look like us, but they're evil. And they're coming for us.
4. The year is 3011 and the metropolis infrastructure is crumbling. The old sewers can't keep up with the explosive waste. A sub-race of humans, disfigured and discolored, adapted long ago to high levels of pollution. Will they agree to clean the pipes of their oppressors? Or will they unionize first?
5. A behind-the-scenes history of Japan's Toho Studios, with special emphasis on the violent jealousies that arose between the little men in the rubber suits that threatened to tear the company asunder as thoroughly as Godzilla and Ghidorah devastated Tokyo.
6. When Matt hides the crate of experimental opiates he found, he doesn't expect to become the target of the CIA, a major drug cartel, and foreign agents. Lucky for him he knows Taekwondo.
7. In a secret underground lab, Dracula, Frankenstein, and the Wolfman perform terrifying experiments on potatoes, glue, eggs, and other common household items in this science book for kids. Includes a fun pronunciation guide by the evil Doctor Dihydrogen Monoxide.
8. No one knows where they came from. They started cutting down trees, polluting our rivers, and destroying the land. These humans.
9. Calista Kalspar's life is turned upside down when she learns she is a half breed of the race of the mucus-oozing creatures her parents have devoted their lives to hunting. Hunting to prove the existence of, that is.
Original Version
Dear highly personalized agent
Matt grew up tough in his opioid ravaged Appalachian town. When his high school sweetheart dies of a fentanyl-laced overdose, he kills the dealers involved. Feeling guilty for taking the law into his own hands [(and worried that it might be illegal to murder a bunch of guys)], he vanishes to a quiet life in Los Angeles where he teaches kids at the local Taekwondo school. [When people in LA want a quiet life, they move to West Virginia. West Virginians move to North Dakota.]
That’s until [Then] a crate parachutes onto the path of his mountain bike ride. Matt swore he wouldn’t get involved again but no ordinary drug shipment comes with serial numbers and expiration dates. [Actually, that's how ordinary drug shipments do come. It's the parachuting part that makes this shipment suspicious.] With his past, he doesn’t dare involve the police, so he hides the drugs on the mountain while taking [and takes] a bag to get tested. If they’re standard street fare, he’ll anonymously notify law enforcement and return to his law-abiding, if boring, life. [But if they're the really good stuff, well, let's just say he'll have a lifetime supply.]
Only the CIA, who developed the drug at a secret facility in South America, is sending in a team after the test results activate a government tripwire. The cartel who stole it is close behind. [After the test results activate a government tripwire, the CIA, who developed the drug at a secret facility in South America, sends in a team. The cartel who stole the crate is close behind.] And the foreign agency manipulating everyone is planning to discredit the CIA by using their own drug to fuel a new wave of addicts. [Manipulating the CIA I can buy, but just trying to manipulate a drug cartel is asking for trouble.]
If Matt was a cautious man, he’d run as fast as he can. But a cautious man wouldn’t have killed those dealers ten long years ago, and there’s no way he’ll let more kids die. [Also, once a vigilante, always a vigilante.]
Monsters Like Us is a 115,000 word suspense novel.
Notes
Not clear why Matt has to determine whether the drugs are standard street fare before he anonymously alerts the police. And if he does need the test results first, it would be hard to stay anonymous while taking a bag of drugs to some laboratory, requesting it be tested, and
asking to be notified when the testing is complete.
Matt's goal is to prevent more kids from dying. Presumably that means from getting their hands on these drugs, and not that Matt wants to take down the cartel and the CIA. Obviously he doesn't want the drugs going to the cartel or the foreign agency. Probably not the CIA either, as their use of a secret lab in South America suggests they're up to no good, as usual. The police aren't much more trustworthy, but since Matt was planning to notify them anyway, if the drugs were street fare, he could just FedEx them the crate. Or he could just destroy the drugs himself after Googling "How to destroy drugs safely."
You'd think the cartel would've had people waiting and watching for the parachute. Guys with binoculars and machine guns.
If you can answer or prevent some of the questions I've brought up, it will help.
Posted by Evil Editor at 12:12 PM

"With his past, he doesn’t dare involve the police."

What's Matt's status? Has he assumed a new identity? Is he wanted in some Appalachian state? For a guy who wants to live quietly and avoid law enforcement, he gets awfully involved in this parachute shipment -- which brings me to another question. If "there’s no way he’ll let more kids die," what's he been doing in L.A. all this time? Although a parachute drop is pretty in-your-face, this can't be his first encounter with kids + drugs in ten years.

I'm confused about Matt's fundamental motivation and character. Is he trying to leave the Appalachian thing behind, or is he still in the drug war? If he's not a cautious man, why has it been ten years since he last took a risk to get between kids and drugs? Have the parachute drop and subsequent revelations caused long-suppressed anti-drug passions to erupt?

Finally, I don't get this plot. 1) The CIA secretly develops a drug in South America. 2) A cartel steals it. 3) A foreign agency (Russian?) is working ALL the levers and is going to release the drug on the streets of America and then blame the CIA, thus discrediting the CIA, with a bunch of drug-dead kids as collateral damage. Did I get that right? If so, I'd say the cartel is the only party whose actions make sense.

Your story sounds like a variation on the classic 'old warrior wants to live in peace but is forced out of retirement to kick some ass' and I mean that in a good way. You've even worked in an martial arts aspect.

I liked that the opening setting is in Appalachia.

On the third paragraph, it breaks away from Matt to give us more of a birdseye view of the larger agencies at work. But it doesn't tell us of the personal threat to Matt and the kids. On a previous query EE suggested the author stick with information the character would know. I'm wondering if it would be a good strategy here too. Instead of explaining the bad guys' plan, tell us how things escalate for Matt. I don't know if that would work well or not, but something to consider if you haven't already.

Knowing what skills Matt has to deal with this threat would tell us something about your book. For example, will he and his kid students take on the baddies using taekwondo? Are there exciting mountain bike chases?

I had the same logic question as EE - why doesn't he destroy the crate?

I hope this is helpful to you. I would like to hear more about it.

Did you mean no ordinary *illegal* drug shipment comes with numbers and dates? How are the contents packaged that would imply this is an ordinary or not shipment? And does he think the parachute is normal?

It's a bit of a contradiction to say he doesn't dare involve the police and then that he plans on anonymously notifying law enforcement (someone other than the police?)

Rather than waste space telling us what your MC isn't going to do (anonymously notify the police), it would probably be more useful to tell us what he is planning on doing.

Others have already pointed out the (lack of) logical action issues by all parties. Hopefully that's just lack of space in the query making it look that way and it's better explained in the book. For the query, try to rewrite so the questions don't arise.

Thanks everyone. Great comments and a big help.