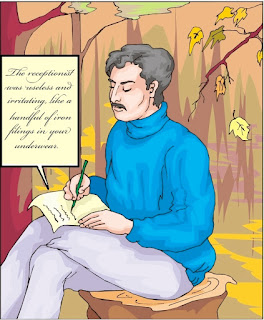 The Bulwer-Lytton fiction contest deadline is approaching. Get your entries in.

For the uninitiated, the Bulwer-Lytton contest is searching for the worst opening line for an equally horrible novel. If anyone can write such things, it's Minions. Let's make EE proud!

Ok, I'm up for the challenge. Overwrought, cringe-worthy opening line...here I come.

I actually like "It was a dark and stormy night." Clear and to the point. WHo needs showing when you can tell?

Receive a response from Professor Rice today. They want entries no longer than fifty or sixty words. Shucks, it's hard to write dreck in fifty words. I shall practice for next year's contest. Think: crap, crap, crap! Now write.

It was a dark and stormy night; the rain fell in torrents, except at occasional intervals, when it was checked by a violent gust of wind which swept up the streets (for it is in London that our scene lies), rattling along the house-tops, and fiercely agitating the scanty flame of the lamps that struggled against the darkness.

The claim that they prefer a maximum of 50 - 60 words isn't exactly backed up by the fact that last year's grand prize and runner up are both longer.

It would have been a dark and stormy night, only there were insurmountable problems, not least of which was an inappropriately timed pseudo aurora borealis which happened to coincide with the most clement weather witnessed since records began, but in spite of this glaring setback, The Dark Lord of All Things Monstrously Evil said, "hey — fuck the goddamn weather," and exterminated all living creatures in an instant, bar himself and his favourite pet giraffe.


Sooo....came across this actual opening line from a published novel. Thought I'd share.

A hundred miles above the equator, a day's trip by boat from the nearest land, in a place where ocean currents collide beneath a vast horizon of black water and starry sky, a 1,500-foot double flame helix smoldered furiously from the cap end of an alloy gas fountain.