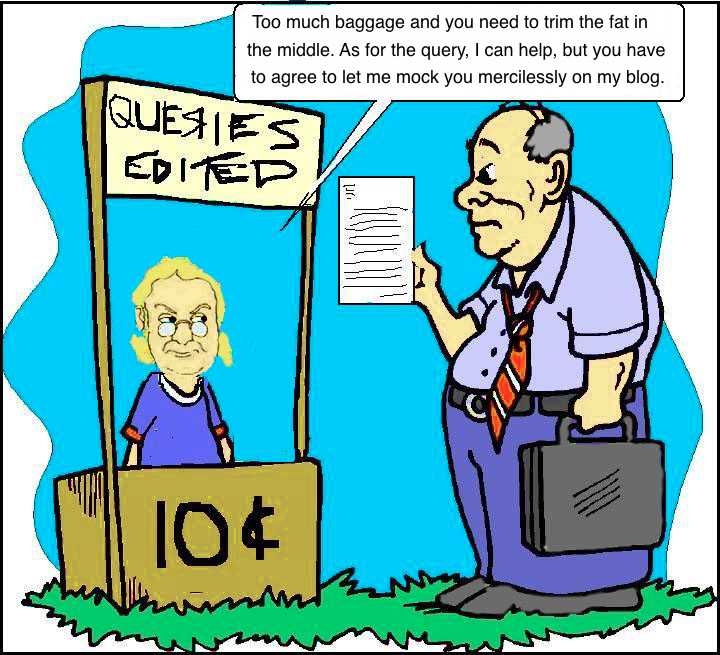 1. A mommy blogger tries to parody Lewis Carroll's the Jabberwocky and can't think of a rhyme for "blog".

2. The secret son of Evil Editor and Julia Roberts is starting his own blog…and he’s going to reveal lot of shocking news about his parents.

3. Piper and Chad are assigned to work together on a blog, but they both refuse. Will their teacher make good on her threat to fail them both? Or will she decide her job security is more important?

4. Private Investigator Amanda Socci sets up Kidblog, a decoy kiddie-porn site with enough spyware to positively identify any creep who tries to download from it. Then she figures that blackmailing high-profile creeps is far more lucrative than handing them in to the authorities. But she didn't figure that mega-creep Senator Giles could trace the technology straight back to her.

5. First we had PBSKids, then NBCKids and National Geographic kids, and any number of shows pandering to the younger set. Then a plucky, comic-relief kind of character suddenly gets his big break, and squanders it all tackling the most vile evil of all: Wordpress! Hilarity and grammatical errors ensue…

I am seeking representation for my realistic fiction Middle Grade manuscript, Kidblog, complete at 21,100 words. The story is told through a dual-voiced narrative, blog entries and comments, online chats, and text messages. [What, no tweets?] [When it comes to fiction, kids have always been ahead of adults in the technology fields. Back in the 1870s it seemed like every other middle-grade query was told through telegraph messages, smoke signals, and hand-written letters, none of which today's kids have ever heard of.] [Am I showing my age?] [If archaeologists ever find a middle-grade query from prehistoric times it'll probably claim the story is told through cave paintings, cuneiform, and signs from the gods.] [Also, "dual-voiced narrative" sounds pretentious. Just say much of it is told through...and list the other stuff.]

Play-it-cool Chad has big plans for seventh grade: smooth talking his way to decent grades and acing the basketball team tryouts. Play-by-the-rules Piper has big plans, too: keeping up her straight-A streak and crafting a surprise birthday gift [for?]. Neither plans on being partners for a clutch English assignment. But their kazoo-tooting [Play-the-kazoo] teacher insists they must work on the class Kidblog together – or fail! [Does she tell them this with the kazoo in her mouth? Because that would seem a bit disrespectful.] [And yet I'm not sure why the teacher's only trait worthy of mention is her kazoo tooting if she does it only in a respectful manner.]

A Slurpee versus m & m-fueled battle of wills ensues when first Chad then Piper decides collaboration WILL NOT HAPPEN. [There'd be more conflict if only one of them refused to collaborate. If they both refuse, it's a win-win situation. Or lose-lose, if the teacher makes good on her threats to fail them both, though that's unlikely, as it would cost her her job when the parents sue the school system.] With the clock ticking, conflicts pile up at school and problems bubble up at home. Then, with their plans unraveling fast, Chad and Piper face twin family emergencies that force them to find common ground – and even friendship – in the unlikeliest of places. [This would be much more interesting if you were specific about the conflicts, problems, plans, emergencies and places.]

Writing credits include x, y, and z. I’m an active lurker, if not poster, on FB, Twitter and Instagram. [Lurking is not a credit.] My website, currently being updated, is abc.com. [If you hurry up and finish updating it you won't have to admit it's being updated.] [Also, I went there, and it's all about TV shows and nothing about your book.]

Attached are the first x pages/y chapters of my manuscript.

The setup is okay, but  once you get into the story it becomes vague. We can sympathize with specific problems and emergencies, but we don't know what they are. We need something besides the format that hooks our interest.

Not sure what Slurpees and m & ms have to do with the battle of wills.

I'm having a hard time suspending my disbelief on the premise here. I can see why a 7th grader whose plans for keeping his grades above the failing level rest solely on his ability to smooth talk teachers might find himself with an assignment that determines whether or not he passes a class. But how did straight-A student Piper end up in such a situation?

Teacher with a kazoo just makes me think of a slightly modified version of the way the adults talk in the Peanuts cartoons.

Replace the vague references with details of what actually happens so that editors can see what you have planned for the story rather than having to guess whether the school and home issues are interesting or not.

Slurpee vs m&m? Come on. Everyone knows it's Slurpee vs Icee. Icee wins, btw.

I'd like to know just what the outlying situations are. Is family emergency a flooded basement, a pregnant sister, or a mass murder?

I was a straight-A student in high school, and at that time in my life it wouldn't have taken a fail to kick me into high-anxiety mode--a B- would have been horrible enough. (It drags down your average for the WHOLE YEAR!)

I do think though that this story would be more unusual and the characters more interesting if the girl were the smooth-talking one focused on basketball and the guy the high-maintenance straight-A student.

This book sounds like an epistolary version of Flipped by Wendelin van Draanen. Same characters (cool guy, brainy girl), same narrative technique (alternating points of view), just a different set-up for what throws them together.

Tell us what makes this novel unique. I agree that we need more details about the problems they deal with. I also want to know why the two refuse to work together; "Slurpee vs m&m" doesn't tell me anything. Why don't they simply take turns posting on the blog? It's not like they have to interact with each other in the same room.

The stuff in the first paragraph belongs at the end.

I had to look up "clutch" and I'm still not sure it makes sense in that context. There are a lot of words here (kazoo, M&M, Slurpee) which present images that don't seem to be related to the story, creating a confusing effect and distracting us from your story. Try to leave such words out.

It seems to me the central story is this:

Two kids who hate each other must support each other in the face of disaster.

The disaster being the twin family emergencies, that is, not the blogging assignment. Better tell what the emergencies are and what the kids have to do; that's bound to be more interesting than the need to complete an assignment together.

As EE hinted, blogs are pretty passé, and in two years (your earliest possible pub date) they'll be even more so. However, agents don't necessarily know that.

I did like the kazoo-tooting teacher more than the play-the-kazoo teacher.

But I don’t get where the werewolves and vampires fit into this--not to mention the zombies.

Mister Furkles, you are so right. No fae, magic or undead in sight. What kind of school is this?

No school I'd want to be in. At least my high school had walking brain dead.

Author here - Thanks EE and minions for your comments. I will certainly work to further explain the plot beyond the initial set up and give more background on the twin emergencies. Also, I'll do my best to add a vampire or two - perhaps the lunch lady in the cafeteria? Or the PE teacher? Oh, the possibilities....
Will resubmit shortly. Thanks again!