Why Haven't I Heard from Dancing with the Stars? 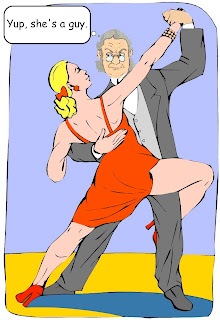 As my Twitter followers are well aware, my Twitscription is: World's most famous editor. Does that qualify me to be on Dancing with the Stars?

Now you may say, Of course it doesn't. Most people have never heard of Evil Editor. To which I say, I just examined the list of celebrities who have appeared on Dancing with the Stars, and had never heard of 64 of them until they made their appearances. Which is not to say that no one's ever heard of them, just that the list of celebrities sports fans have heard of doesn't necessarily intersect with the list soap opera fans have heard of. One viewer's Kelly Monaco is another viewer's Clyde Drexler is another viewer's Evil Editor.

Here are some of the fields from which celebrities have been invited to compete on the show: Rodeo cowboy, fashion entrepreneur, disk jockey, chef, son of famous singer, brother of reality TV star, daughter of ex-governor, beach volleyball player, daughter of famous singer, idiot from New Jersey, and unicyclist. No one from the publishing field has competed.

I'm sure they'd love to have Julia Roberts and Bruce Springsteen and Tiger Woods on the show. Those are top celebs in the acting, singing and sports fields. Instead they get such c-list stars as actor Ralph Macchio, singer Marie Osmond and football player Chad Ochocinco.

The point is, Evil Editor is the Julia/Bruce/Tiger of editing. King of the hill top of the heap A-number 1 New York, New York. A-List all the way.

It must be embarrassing for the producers when they introduce the "star" to his dance teacher, and the dance teacher is more famous than the star. The star is some geezer who played Ernie, the 4th son on My Three Sons, 50 years ago, while the dance teacher has 20,000,000 Facebook friends and gets invited to state dinners at the White House in hopes that he/she will endorse the president in his bid for reelection.

It's a joke every season when they announce the names of the Stars and people are saying Who? Who? Who?!! And the producers say, He played drums in Bette Midler's stage show in 1987. She's a real housewife from Omaha. And she once served a sandwich to Lauren Bacall.

Of course they might prefer to go with a literary agent rather than an editor, but no agent is higher than B-list, the only B-list agent is Kristin Nelson, and according to a source on her staff who wishes to remain anonymous, Nelson has two left feet.

The only reason I can think of why I haven't received an invitation is because they're afraid I'll win, and they prefer that the winner be a TV star. Have they looked at my picture? I'm fatter than Penn Jillette, less attractive than Steve Wozniak, and older than Cloris Leachman. And none of them even made it to the final four. I could dance like Fred Astaire and I wouldn't make it past the fifth week.

Too bad I don't have 20,000,000 followers who could bombard the producers with suggestions/demands that I be invited. I need to become a TV star. Is there a network that might be willing to cast me in a sitcom about an editor who's always at odds with his most famous client, John Grisham? Call me.
Posted by Evil Editor at 12:12 AM

It may be that you have to work your way up via a reality cookery show or some variant on the Celebrity Big Brother theme.

I'd suggest brushing up on your vol au vents and hanging out in a poncho while you practice your skating. I hear Ramsay is rather partial to a vol au vent and everyone knows Clint Eastwood is dying to crack the reality scene with his stone-faced persona and whipcrack holster talents — all it would take is a nod from the grizzle-faced chef or a death rattle from the spaghetti-forged gunslinger and you could be going out on prime time TV.

In the mean time, I'll pray for you.

Maybe you need to start out on Survivor. But I'm sure those producers are afraid you'd eat the rest of the contestants. Betty White got the gig on Saturday Night Live through a Facebook campaign. Maybe we need to start a Twitter campaign - #DWTS4EE

I think the bigger picture is why NO ONE from the publication world whether it be an author, agent or editor has appeared in Dancing with the Stars.

It's a conspiracy, I tell you. I think TV land is fearful of intelligence, beauty and grace. If they had a contestant with all three attributes they would have to up their game and pay more.

Send them a headshot in an envelope filled with glitter. I hear people love that.

Yeah, I tried following everyone who followed me, but it meant getting hundreds of tweets, and half of them made no sense because they were responding to other people's tweets, and a lot were repeats of what they tweeted four hours ago, and most of the rest were personal info from people I didn't even know. obviously I'm using Twitter for the wrong reasons.

Twitter is yesterday, brah. You need to jump on the next big social network, whatever that may be.

Have you considered yarn-bombing? It's so much more 'now,' man. Or swimming the Thames?

Too bad 'The Love Boat' went out of business. That would have been a definite-maybe.

Wait, you don't love reading the same tweets OVER and OVER again????

I understand what you're saying. I put people into a couple of lists, which helped, but I can understand if you wouldn't want to get into all of it.