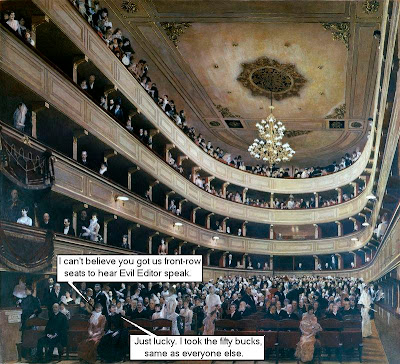 Your caption on the next cartoon! Link in sidebar.
Posted by Evil Editor at 6:33 AM

When I was in college, one of the local mayors - Hershman to name him, was mayor of McKees Rocks. Well, he was crooked, corrupt is the polite word. His administrations in the locality of McKees Rocks (a tiny town 4 miles downriver of Pittsburgh) was taught in the University of Pittsburgh and Duquesne University's law schools as a MODEL of corrupt local government. He gloried in that rather dubious distinction.

One year, his "fundraiser" -- the local football rivalry was well attended. when I say well attended, I mean that all ten to twelve thousand of the political hacks he forced to buy tickets showed up at a High School field that sat 1500 at the very most. And they all waved their tickets in the air.

That finished his reign of corruption.