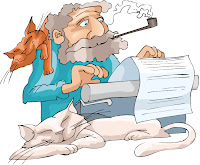 Occasionally query letters are written from the POV of a character in the book rather than the author. I don't recommend it, but it happens. Which has led me to wonder if this has been true throughout history. So I've put together the opening paragraph of some query letters that might have been submitted for well-known books.


My leg? A whale ate it. Most guys would retire from whaling once they were down to one leg, but not me. I'm gonna find that whale and put a harpoon in his side. Preferably before he eats my other leg.

My sister Sally and I are sitting around the house. As usual mom didn't get us a babysitter or a nanny. So we're killing time when this cat shows up and then all hell breaks loose. The cat was as tall as my dad and could talk and he was wearing a big hat and I'm thinking WTF?

The name's Hindley. Life was good around here. Then this homeless kid shows up and suddenly my sister and father like him better than me. Heathcliff's what he goes by. Yes, like the comic strip cat, who isn't even funny. Anyway, I've made it my goal in life to ruin this Heathcliff asshole. Otherwise no one will even remember that I was in the frigging book.

Did you ever have one of those days where nothing goes right, like you travel to Europe to apply for a job and when you get to the place where you're supposed to work the boss won't let you leave and it turns out he's a vampire? I did.