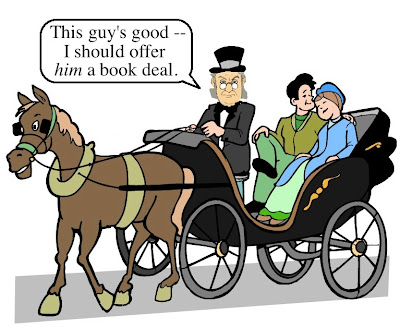 Your caption on the next cartoon! Link in sidebar.
Posted by Evil Editor at 7:07 AM

Hold on tight, kids. The only training I have involves multiple viewings of "Ben-Hur".--Shane

The romance! The charm! The sweetness! Such a shame she's a hooker... --Whirlochre

Euchh! I wish I was wearing blinkers. --anon.

NEW YORK—In a desperate effort to find a trendy new fantasy subgenre to succeed the ebbing vampire craze, Razorbill Books executive Graham Childress decided this week to throw all his professional weight behind a new series of novels featuring minotaurs, the bull-headed, human-bodied creatures of ancient Greek mythology. "Everywhere I go, I hear people talking about minotaurs," Childress said at a publishing conference, frantically trying to drum up enthusiasm for the planned trilogy about a bad-boy minotaur who transfers to a new high school and eventually falls for the one girl who can see the pain and sensitivity behind his brooding exterior. "Plus, labyrinths are really hot right now." The first installment of Razorbill's minotaur series is slated to hit shelves on Dec. 14, the same date three rival publishers will release novels featuring a bad-boy mummy, a bad-boy cyclops, and a bad-boy Mayan vision serpent.