The author of New Beginning 1072 has provided a new attempt, in which:


"I have moved the beginning of the narrative back a bit to hopefully clear a few things up:"

The salt that gave the Blood Flats their color made them near-impossible to farm. [I would just say "impossible," unless people are farming there, in which case I would say nothing.] They also flooded with seawater on occasion, and [forcing] the small collective of which I was a part [member?] would need to migrate to the forest. [Why are the people living where they can't grow food and their homes flood with sea water? Why not live in the forest?] However, the Blood Flats did have their uses; the barrenness of the land provided excellent visibility, the priests had to walk for several days to bring us supplies, [I take back my suggestion that they live in the forest. I now recommend that the collective move to wherever it is the priests go to get the supplies.] and there were a few caves and unpolluted springs. Best of all, some of the rock could be poisonous.  [It sounds like you think you've listed uses of the Blood Flats, but nothing you've listed tells me what the flats are used for. You've simply described the flats: barren, with a few caves and springs and rocks.] [Also, some of the rocks could be poisonous? Why not say some of the rocks were poisonous?] Unfortunately, we were having difficulty getting small enough pieces to make into weapons.
We had rope, of course, [Why "of course"? I wasn't wondering if you had rope, nor was I thinking rope would be great to have on the Blood Flats.] woven from the few tough grasses that grew in the less toxic parts of the Blood Flats. It was great for mundane use, [like making rope ladders for when we had to migrate to the forest and live in tree houses,] but would not stand up long to the Dragon Warlord. Wood had a similar problem. Our only hope of defeating the Dragon warlord lay in stone, and our combined talents. [So far the only talent you've mentioned is rope weaving.]
Soon, the Dragon Warlord would need to eat. [Wait, is the Dragon Warlord a dragon? Why do they call it a warlord?] We were running out of time. [To do what? Does the Dragon Warlord eat people, or does it/he force people to provide it/him with food? ] Han, trying to pick up a boulder, collapsed. [You're running out of time, and this guy's trying to pick up a boulder? For what?] He had been using Hope to work harder than anyone else, not quite believing that the innocent-looking blue leaves could be deadly. [What blue leaves? He collapsed while trying to pick up a boulder for some reason, not while doing something with blue leaves. Unless...Is "Hope" a typo, and he was using Rope? Or is Hope a plant with blue leaves?] [Why would a person try to pick up a boulder? According to Wikipedia, in common usage, a boulder is too big to be moved by a person. They provide this photograph and caption.) 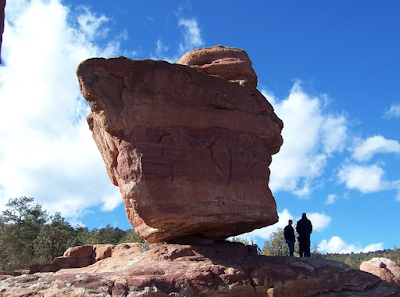 This balancing boulder, "Balanced Rock" stands in Garden of the Gods park in Colorado Springs, Colorado.

If you're worried about a dragon, and you haven't yet come up with a weapon that can defeat it, I would think you'd live in the forest, not a place with great visibility.

I'm sure all my questions are answered eventually in the book, but if we can avoid inspiring so many questions in the first few paragraphs it'll be a big improvement.
Posted by Evil Editor at 10:20 AM

I've mixed feelings about a lot of in media res openings, but this particular one could probably use a bit less droning-documentary-style monologue. Without the cool visuals of a documentary, I don't have much interest in geography, migrations, or threats of a warlord when I want a story about characters, and I'll probably have forgotten much of this info by the time I actually need it. If you're trying to make the landscape into a character, it's not working for me.

Is there no possible way to fit this information into the flow of the story instead of dumping it on us at the beginning? How much of it do we really need to know up front to get metaphorically sucked into the trials and troubles of the characters?

When you switch to talking about Han, I would suggest starting a new paragraph since we actually have a character and a bit of action. The two sentences before seem to belong to the previous paragraph about the warlord, unless you've separated them out for emphasis. (Ignore this if the formatting has been altered by the e-transmission demons to give an incorrect impression).

I'd also suggest maybe a bit of description as to what the Blood Flats actually look like at the location of your character(s). I can assume they're reddish and flat by the name, which makes a boulder come as a bit of a surprise....

Some of this may be that you're going for a particular style of storytelling. If that's not the case, you might want to consider starting with Han collapsing and filling us in on the other details a bit more gradually as the other characters deal with the collapse, implications, and fallout. Readers are willing to wait for a few details if they have someone/something to care about in the meantime.

"the priests had to walk for several days to bring us supplies..." This is in your "good things" list. I think it would be a drawback. You get your supplies late. Am I missing something?
Yeah, why "of course"? Is it meant to be obvious you'd have rope?
Rope won't stand up long to the dragon warlord? The hell you say??
No, but seriously, that is extreeeeeeeeeeeeeemely obvious. Sort of like saying, "We had notebook paper, of course, but that wouldn't hold off the tsunami for long."

If the rocks ARE poisonous the springs won't be unpolluted for long. What if some kid puts those rocks in his mouth? Let's face it. You live in a dump.
"Unfortunately, we were having difficulty getting small enough pieces to make into weapons." You chip them off. Rocks break.

Is Hope some sort of steroidal drug or something?

Han is the name of one person and one person only: Han Solo. You will have to change this.

I don't really believe there's a big enough advantage to living in a place where farming is really hard, there is little grass (never mind the rope, what about baskets? Bedding?) and rocks can be poisonous. Survival is hard enough where there is plenty of food and the rocks are normal. You need EVERYTHING- cooking pots, diapers, water skins or gourds, shoes of some type, bowls, sun shelter, rain shelter, wrapping for wounds, and yes, food. If people are working hard there is a certain amount of calories they must take in every day to stay alive, and some foods have to be eaten that ward off diseases like scurvy and rickets.

What I'm trying to say is, I already kind of disbelieve your story. I'd suggest starting somewhere else and gradually working in the explanations for these things. Like how there's plenty of fish and seaweed to eat, and how you were just kidding about the rocks.

Han is a fairly common name in some areas of the world and has been used in works of fiction other than Star Wars:
https://en.wikipedia.org/wiki/Han_(name)
Why should the author change it?

I'd agree about the strangeness of not being able to make small rocks. Not being able to find usable pieces large enough would make a lot more sense. If your excuse is they don't have anything to break the big rocks up with, that's what other rocks are for--it's a common problem in history.

I think if you're going to give us a beginning like this, we need more specific details about what threat the Dragon Warlord poses (eating/enslaving people?) and why specifically you need rocks (fire hazard for other materials?), etc.

I'm afraid this feels too much like you're starting with a world rather than a character for the audience to relate to. I know the story is in first person, but I'm not getting a sense of the main character. He feels like an omniscient narrator, despite the use of `I'.

Have you considered looking at your book's ending in order to see more clearly where the story should start? I've heard sometimes that helps. Another thing that might help is to put the book away for a month, then reading it strait through in one sitting so you get a better sense of how the story plays out for the audience.

Good luck! You have an interesting world here.