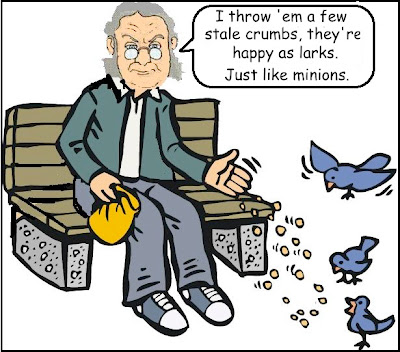 Your caption on the next cartoon! Link in sidebar.
Posted by Evil Editor at 7:00 AM

This had me laughing out loud.

Yes, I poison them, too.--Rachel

See this? This is the difference between me and that Kristin Nelson, okay? --Anon.

Yeah, yeah. Everyone has vices.--wo

I'm figuring, like Alfred Hitchcock, only with manuscripts... --wo

You better enjoy it, this pigeon feed costs more than most authors get paid. --Nikki

There once was a Urban Planner Egghead who attempted to rid a city of pigeons by poisoning their food.

It gave the pigeons diarrhea at first. Most unfortunate for anyone underneath, although seagulls are much, much worse. Then the pigeons died in some rather awful places, like on ledges of buildings to decay in full view of innocent office dwellers, blocking downspouts, electric transformers, and in reservoirs and ponds. Lice, normally happy to remain on live pigeons, found dead pigeon unsuitable and searched for new hosts.

A few days later, their cousins "The Squatter Pigeons from the suburbs" moved into the neighborhood. The Urban Planner was confined to the municipal cleanup crew.