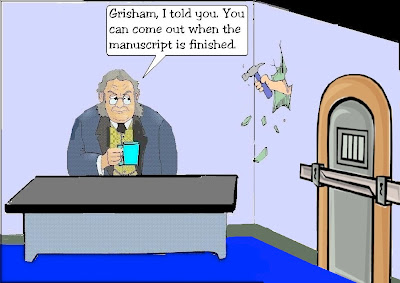 Your caption on the next cartoon! Link in sidebar.
Posted by Evil Editor at 7:04 AM

Good grief, I don't even remember this one. Must have been in the queue for a while, EE.

What is it with you and Grisham, EE?

Is there a cask of Amontillado in there somewhere?

I'm your new best friend, talpianna. Only I like his POEtry better than his short stories. (Aren't literary allusions so much fun?!)

I don't think EE perpetuates the Grisham riffing so much as minions keep bringing it up. Or maybe it's just me who keeps bringing Grisham up.

Have some Madeira, m'dear Rachel.

1
Many mellow Cydonian suckets
Sweet apples, anthosmial, divine,
From the ruby-rimmed beryline buckets
Star-gemmed, lily-shaped, hyaline;
Like the sweet golden goblet found growing
On the wild emerald cucumber-tree,
Rich, brilliant, like chrysophrase glowing
Was my beautiful Rosalie Lee.
--Rosalie Lee
2
In the music of the morns
Blown through the Conchimarian horns,
Down the dark vistas of the reboantic Norns,
To the Genius of Eternity
Crying, “Come to me! Come to me!”
--The Poet’s Vacation
3
On the beryl-rimmed rebecs of Ruby
Brought fresh from the hyaline streams,
She played on the banks of the Yuba
Such songs as she heard in her dreams.
--Lily Adair
4
As an egg, when broken, never
Can be mended, but must ever
Be the same crushed egg for ever—
So shall this dark heart of mine!
--To Allegra Florence in Heaven
5
As the diamond is the crystalline Revelator of the achromatic white light of Heaven, so is a perfect poem the crystalline revelation of the Divine Idea.
--Preface to Eonchs of Ruby

After Poe's death, Chivers accused Poe of plagiarizing both "The Raven" and "Ulalume" from his own work,though other critics suggested Chivers's Eonchs of Ruby were a "mediocre restatement" of Poe's poems. The first poem of the collection, "The Vigil of Aiden", was an homage to Poe, using names like "Lenore" and the refrain "forever more!" On July 30, 1854, Chivers published an essay called "Origin of Poe's Raven" under the pseudonym Fiat Justitia, claiming that he inspired Poe to use trochaic octameter and the word "nevermore" in "The Raven". Chivers also suggested in the Georgia Citizen that Poe learned to write poetry from him. As literary scholar Randy Nelson wrote: "anybody who's read both Poe and Thomas Holley Chivers can see that one of them 'influenced' the other, but just who took what from whom isn't clear." (Wikipedia)