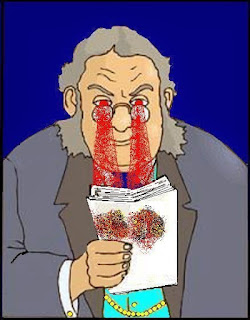 1. The Crucifija, an ancient relic found on a shipwrecked galleon, goes missing while on display in Dallas. Police are stymied. It's up to Herbie Quinn and the more than 5000 strong members of the American Pawnbrokers Associaten to locate the Crucifija before it unleashes its curse.

2. A small Middle Eastern town claims to be the REAL place of Jesus's crucifixion to drum up some controversy (aka tourist dollars). Like The Da Vinci Code but with more sociopolitical conflict.

3. A sixteen-year-old girl has the Cricifija, a medallion that will open the gates of hell and release Satan's army. Her best friend has been kidnapped by a man who wants to use the medallion to start Armageddon. Will she give it to him in time for her and her BFF to go to the spring dance?

4. St. Peter's Crucifija is stolen from the Zurich International Museum. ZIMROS hires the more than 5000 members of the American Pawnbrokers Association to recover it. But the thief escapes to Prague where the APA can't follow because there are only 1314 vacant 3-star hotel rooms.

5. Christ was a woman, Judas knew it and was threatening to out her, Pontius Pilate left a scroll in his tomb revealing the whole thing in Aramaic riddles, and a pair of scholars in the 21st century is putting it all together while evading Vatican assassins.

6. This is the story of the life and death of the Mexican Jesus (Heyjus), set in modern day as he brings his message to the corrupt police and drug gangs of Mexico. Will he risk a repeat of the Crucifija or make for the U.S. border to challenge Trump’s immigration policies?

Sixteen-year-old Ciri is in one Hell of a predicament...

She wants to honor her father's dying wish by keeping the medallion that opens the gates of Hell away from her new stepfather, especially when she realizes her stepfather intends to use the medallion to start Armageddon. [Apparently her father realized the same thing. Otherwise it seems weird to make such a specific dying wish as Don't let your mother's new husband get my medallion.] [When you want to start Armageddon, it's always convenient to be married to the mother of a girl who has a medallion that will open the gates of hell.] But her stepfather has kidnapped her best friend, and will release her once [only when] the medallion is in his possession. Now, Ciri must rescue her best friend without breaking her vow to her father...or unleashing Satan's army. [Breaking her vow and unleashing the army are pretty much the same thing. Unless you're suggesting she might use the medallion to open the gates. You could just change "or" to "and."]

CRUCIFIJA is a 75,000 word YA urban fantasy novel [Wait, that's it for the plot? That's just the situation Ciri finds herself in, possibly in chapter one. We want to know what she does about it, what goes wrong, why her mother married this loser, why her father entrusted the medallion to her instead of tossing it into Mount Doom or the Pacific Ocean or melting it down or giving it to the pope.] that's a hybrid of Carrie Vaughn's Kitty Norville series and Jacqueline Carey's Agent of Hel trilogy, [You should change the title to Hel Kitty.] only with a teenage audience in mind. [Possibly if I'd read these series I'd have some idea what you're talking about, but I haven't, so I looked them up. It seems the Kitty Norville series is about a werewolf named Kitty who hosts a talk radio advice show for the supernaturally disadvantaged; and the Agent of Hel series stars a file clerk whose dad was a demon, and is set (according to Tasmanian author Tansy Rayner Roberts) in a town full of "angry ladies in leather trousers, having lots of sex with monstrous men, and kicking butt." I don't see the resemblance to your book. In any case, I'd rather you used the space to talk about your book than to compare it to other books.] I have been coached by Chuck Sambuchino and Jane Friedman of Writer's Digest. [You have coaches? Is this the next big thing? Although I recommend leaving this out of the query, if you do include it you now have my permission to include Evil Editor on your list of coaches. Specifically, refer to me as "Evil Editor, the most famous editor in the world."] Also, I have participated in the Algonkian Novel Writing Program and the Michigan Writing Workshop. [Not important in your query. Unless you're writing to someone you met when she was a speaker/instructor there.]

Thank you for your time. I look forward to working with you soon.

Whose idea was it to have a medallion floating around that can unleash Satan's army?

God: Okay, I've managed to imprison Satan in the depths of hell where he won't bother anyone.

Angel: Nice work, Dude. But what if the humans need Satan some day, like to help fight off the Borg?

God: Hmm, good point. I know! I'll create a medallion that will open the gates of hell. And I'll entrust it to some random guy who can pass it down through his family for eternity, even if that means it may one day end up in the hands of a sixteen-year-old girl who believes freeing her best friend from a kidnapper is more important than saving the entire human race.


Three sentences is enough to set up the situation. Then add five to seven sentences in which you convince us that you have a compelling story with a main character we'll want to spend hours reading about. Or say nothing about the book, but declare you've been coached by Evil Editor. That's usually enough to close the deal.

Does the medallion depict a crucifix? Why the Spanish title? Are we targeting the Hispanic audience?
Posted by Evil Editor at 1:51 PM

When there's so little information about the story in your query that EE needs to make up a detail to fill out a three sentence summary, that's a problem.

Unless you're specifically querying an agent or editor who you know adores log lines, dump the first sentence. Most editors and agents I've seen reviewing queries don't seem to like them.

Split the first sentence into at least two. Start with the promise to Dad on his deathbed, a general promise to keep the medallion safe, unless Dad knew about the guy who becomes Ciri's stepfather and was specifically warning her about him. (Though that would raise the question of why Dad didn't warn Mom to stay away from this guys and definitely not marry him.) Then address the specific problem of the stepdad who wants to bring about Armageddon for some reason in the next sentence.

So now Ciri needs to figure out a way to rescue her best friend without giving her evil stepdad the key to Hell. What resources or skills does she have that might enable her to do this? Is anyone helping her? Does Evil Stepdad have any skills or allies that will make things harder for Ciri? Has he threatened to kill her friend if Ciri doesn't cooperate? Is there a time limit before he does? What plan does Ciri decide to try? Why might it succeed? Why might it fail? What happens in each scenario?

An editor or agent is going to need to know whether most of your story is about Ciri enlisting the help of angels, fighting demons stuck on Earth, or trying to convince her mom to get an annulment. The idea has potential, but the query leaves too much to the reader's imagination.

Comps usually suggest what other successful books the audience for your book is already reading and buying. Just saying that your story is a mashup of (x) and (y) can make it seem like your book isn't particularly original.

Congratulations, your query does sound like a cover blurb. Unfortunately, the agent/editor doesn't have a publisher's guarantee there's probably something interesting in the pages after the initial situation. More plot direction please.

With only this to work with, I'm wondering if chapter one is father dying, chapter two is mother dating, chapter three is mother's marriage, chapter four is learning the stepdad is creepy, chapter five is the stepdad finding out about the medallion, chapter six is him asking for it, chapter seven is her saying no.... you get the picture.

If rescuing the friend is the main plot, focus on that. Tell us a few of the obstacles involved and how Ciri overcomes them, or plans to.

Yes, lose the first sentence. It's needlessly clever and flippant when hell's army is about to invade earth.

For that matter, much of this seems awfully understated. "I told you to keep that atom bomb away from the cat -- especially now, when she's prepared to wipe out humanity." "I'll never give you the power to unleash Armageddon, thus extinguishing humankind -- I promised Dad I wouldn't!"

Satan's minion is preparing to turn the earth over to demons here. Darken your tone and widen your scope. Scare me.