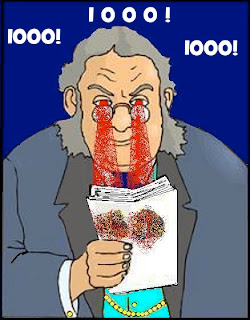 Guess the Plot
The Journal of Forgotten Secrets

1. Cesare, spy-for-hire, triple-crosses chefs to gain a dish which will win the big cook-off. When bacon roses give him amnesia, can he follow the recipes which are encoded as a series of love poems to his fifth-grade teacher? Also, a Borgia ring.

2. Preteen Megan LaCosta has literary ambitions and hypersensitive emotions. When she disappears, only her mother believes the truth is buried beneath the breathless prose of Megan's diary.

3. Denise's daughter's real father is... um, that guy, whatshisface. The principal of the local high school used to be a... well, something bad, anyway. In this book, much that was unknown would be revealed, if only the author could remember it.

4. A game of hide and seek leads to a game of life and death when Orion finds a journal that could break the codes to his mysterious past. Also, a master puppeteer.

5. Aiken thought it would be a good idea to write down all the secrets he was keeping from his wife in a journal. So he wouldn't forget them. It would also have been a good idea not to leave the journal on the dining room table.

6. When Elias discovers a journal kept by his late father, he assumes it'll be dullsville. Instead, it's an account of the old man's sexual exploits as a NYC gigolo. This is gonna fill a lot of those empty hours on nights when Elias can't get a date.

Three weeks ago, Orion knew he was going to avenge his father’s murder. Three days ago, he knew he was all that remained of the Martins family. Three hours ago, he knew he was the one doing the hunting. Three minutes from now, he'll discover just how wrong he’s been. [Two years ago this query was posted on the author's blog. 18 months ago it was posted at Absolute Write. A year ago it was posted at Query Shark. Soon after that it was linked to on a multitude of blogs. Today the author is represented by agent Suzie Townsend. Next year the book will be published.] [Once upon a time someone hit upon the idea of writing an entire query letter from the POV of the main character. An agent thought it was clever, the book sold, query letters started coming in from Scarlett O'Hara, Holden Caulfield, and The Little Engine that Could, and all agents began slapping instant rejection slips on such queries.] [Imitation is the sincerest form of flattery, or so said Charles Caleb Colton. But if you do something that's been done you have to do it better. In this query the connections between the events aren't clear enough to tell a story. The repetition of the word "knew" is enough to stress it without also italicizing it. Plus, I don't like he knew he would avenge his father's murder. "Vowed" to avenge it would make more sense. If his father is his only living relative, you'd think he would have known that, yet it takes another two and a half weeks to know he's the last Martins? I'd scrap the whole paragraph. The only specific is that his father was murdered. I'll admit I'm intrigued by what's going to happen in three minutes that changes everything, so let's read on.]

The world as Orion knows it comes crashing down when a game of hide-and-seek [turns into a bloodbath after an argument over whether olly olly oxen free or ollie ollie umphrey is the proper phrase with which to call back the players.] reveals family secrets that begin to shatter the barriers between the ordinary and the enchanted. The deeper he follows his ancestor’s [Which ancestor?] trail of deception, the further he is ensnared in a game of life and death [He was in a game of hide and seek one sentence ago. Now he's in a game of life and death? How old is he?] against a mysterious individual pulling strings like a master puppeteer. [This is all vague. What trail of deception? Who is the mysterious individual?] [If I had to be in a life and death battle with someone, I wouldn't mind my opponent being a puppeteer.]

It’s up to Orion to fulfill his destiny and uncover the enigmas of his legendary bloodline, placing the fate of two worlds in his young hands…if he can survive long enough to realize it. [More vagueness. What did the game of hide and seek have to do with anything? Where does the journal come in? You're supposed to be summarizing the story.]
THE ORION CHRONICLES: THE JOURNAL OF FORGOTTEN SECRETS is a young adult novel of 92,000 words. A marketing campaign is underway via Facebook, Twitter, and the website, ______________. [Isn't a bit early to be marketing a book for which you're seeking a publisher? Even after you find a publisher it could be a year or two before the book sees print.]

The only writings under my name are sports articles for the website, __________.

[Author's note: The "Journal of Forgotten Secrets" part of the title - let's just say that good ol' Orion finds out that he's kinda/sorta been lied to his whole life and this infamous journal is the key to breaking the codes to his past.] [I made the assumption that The Chronicles of Orion was the title of the series, and The Journal of Forgotten Secrets was the first book in the series. Now I'm wondering if the whole thing is the title of this book. If so, I suggest rethinking that.]

While playing hide and seek, Orion stumbles upon a journal that contains secrets about his ancestors. But someone else wants the journal, someone who just killed Orion's father. Is that your plot? Those two sentences have more information than your entire query. Start over. A possible format might be this:

Paragraph 1: The setup. Who's your MC, what's his situation, what does he want? Paragraph 2: The stakes. What will happen if your MC fails to get what he wants? Who wants him to fail, and what is he doing to bring about the MC's failure?
Paragraph 3: The Plan: How is the MC planning to overcome his seemingly insurmountable odds?

Be specific. Once you have it down you can jazz it up if it needs a little spice.

WOW - congrats, EE! You have staying power to the max, man!

Now I'm wondering if EE is to be found over at Absolute Write.

Never mind the bombast and the gimmicks. Tell us what happens.

Orion thinks he's the only surviving member of his family, but when....

What EE said. Am not even sure if your Orion dude is a mere mortal, or what.

You know there are a lot of "how to write a query" sites out there which tell you you need to start with a hook, or a log-line, or something like that. This results in a lot of queries that have two opening paragraphs. This is such a query.

And yeah, it's way too vague. Other than that Orion, like Hamlet, is seriously contemplating avenging his father's murder, I can't tell what this story is about.

I sold a novel a year ago that's coming out some time next year. Marketing hasn't started yet. Dude, you haven't even got an agent yet. It's way too early to start marketing.

What if your marketing succeeds? What if you get all the kiddies saying "Yes! Yes! I want to read THE ORION CHRONICLES: THE JOURNAL OF FORGOTTEN SECRETS! Give it to me now!"? By the time TOC:TJOFS actually comes out, they'll be all into Pink Wombat comics, or Extreme Bowling, or law school, and have forgotten all about TJOFS.

Ha! I wondered why I was suddenly getting a parade of hits from your blog. :-D

Well done, EE - a thousand queries harpooned, that would add to about ten thousand laughs for your minions, quite a feat.

And kudos to the minions for providing at least six thousand fake plots. Have any of the fake plots ever developed into real stories?

Now... to the query.
I cant get past a game of hide-and-seek in a YA novel.

Orion's an adolescent, right? Was he drafted into playing it with a bunch of pint sized cousins at a family get together (when their parents just wanted to drink?) No, he's the last of his family, so no cousins for him. So he was playing hide and seek with his peers? Hmm, it doesn't ring true.

I think either drop the game from the query, or give it an ounce of context.

*Pops in to throw confetti made from shredded queries*

Oh, something about the query. Ummmm ... I have a cat named Orion.

I'm sorry, author; I have no sense of who Orion is (your Orion, not mine), what the stakes are, why Daddy's dead or why I should care about yet another Chosen One. Make me care. Specifics are a good first step.

The other question about starting a marketing campaign before the book's been bought is what happens to it when the publisher decides to change the title and the characters' names?

1000 queries, a big milestone. You deserve a big attaboy and thanks.

I also know an Orion. Who knew it was so common?

It's like witnessing Arnie pumping his thousandth six pack of iron, Bruce Willis shaving his head for the thousandth time, Marilyn Monroe having her skirt...

I'm sure Grish will be along any time now to add his applause to the chorus of cheers.

And I'm here thinking, "Who calls their character Onion?" Damn this font. OR my eyes. Or something.

Congratulations oh most Evil. And thanks for all the help you've given me, no matter how bad my stuff was, you treated me with dignity and showed me how to do it better.

Total awe, respect and I still want to mind meld. Writing your obit was very cool, that it made it on you site,well, it doesn't get much better for me.

I am delighted to see the writers of this century are taking advantage of the technology to link up with Evil Editor.

But why Mr. Peabody?

Because Nigel, there are many terrible writers who need help and I believe Evil Editor addresses the need in an astute and accurate manner.

That's the 2nd recent comment that seems to suggest Mr. Peabody's boy was named Nigel. It was Sherman. Wait, were the cartoons dubbed into British, and they changed the name to Nigel?

How awesome for us that you have dispensed so much advice, hilarity and kick-assness for so long. We are forever grateful.

And what's wrong with the name Orion? It's a lot simpler than some of the kid's names these days - or some of the adults for that matter.

Why did you use the verb "knew" in those first few sentences? Omitting the word may give them more punch. I'm assuming that since he's going to avenge his father's murder, he's going to know about it? Or is there a symbiote sharing his body that is clueless as to what his host knows?

"Three weeks ago, Orion was going to avenge his father’s murder. Three days ago, he was all that remained of the Martins family. Three hours ago, he was the one doing the hunting. Three minutes from now, he'll discover just how wrong he’s been."

Congrats, EE. What a great milestone. You've provided so many laughs.

Author, your letter reads like the back copy of a book. That's not inherently bad, but the back copy of books are necessarily vague. People to whom you're selling need specifics about what happens. Remember that it's the audience that's agreeing to be teased. The agents and editors need to know what happens. Still, the idea sounds pretty cool.

Congratulations on the big 1000, EE. Much celebration ensues!