As the query and opening queues are empty, here's something to pass the time, a story I contributed to the Autumn, 2008 issue of GUD magazine. Not sure if they still exist. They still have a website, but it doesn't seem to have been updated lately.

Benkelstein and the Time Warp

Benkelstein, trying to recall the lyrics to a Rice Krispies jingle while driving eastward on Highway 70, almost missed the new sign.  It was green, with white lettering.  “To I-40,” it read, with an arrow pointing to the right.  Benkelstein hit the brakes, just hard enough to slow to twenty-five miles per hour, and pulled off at the new exit.  “It’s about time!” he said to his wife.  “I was beginning to think they’d never get this road finished.”

“Hmm?”  Mrs. Benkelstein said, looking up from her book.

“Why, this’ll cut a full ten minutes off our trip easily,” he went on.  “Let's see, that’s twenty minutes round trip, and since we visit your mother once a month, twelve times a year--twelve too many, I might add--we should--”

“I’m not listening,” Mrs. Benkelstein said.  She went back to reading 101 Ways to Slice a Batard.

Benkelstein pressed on the accelerator as he mentally calculated the number of years it would take this new short cut to save him a full twenty-four hours behind the wheel. 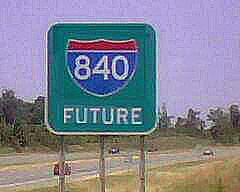 Fifty yards in, Benkelstein passed the new road’s first sign.  “840,” it read, and below that, the word “Future.”  “That’s interesting,” he said to Mrs. Benkelstein.

“What's that?” she said, mildly irritated.  She was reading about the diagonal crosshatch heel slice.

“Apparently this is the road to the future,” he told her.  He checked the speedometer, which had reached 60.  “Hmm, 840 miles. At this speed, we’ll be there in fourteen hours.”

"In the future," he replied.

“What are you babbling about?” she asked, looking up.

“I think I know what it means,” Benkelstein answered.  Already he had discarded his original theory and formulated a new one.  “We’re in the future,” he said.  “Don’t ask me how; we must have passed through some kind of time warp.  And while this is the year 2006 in the present, it’s the year 840 in the future.”

Mrs. Benkelstein rolled her eyes.  “Correct me if I’m wrong,” she said, “but if this is the year 840--which it most certainly is not--then this would be the past, not the future.”

“Don’t be ridiculous,” Benkelstein said.  “There were no asphalt highways in the year 840.”

“A valid point," Benkelstein acknowledged.  "But you’ll at least have to admit that there were no road signs printed in the English language in central North Carolina in the year 840.”

“There were no cars, either," his wife noted.  "And as we’ve seen no other cars since you pulled onto this road, I persist in claiming this could as easily be the past as the future.  Or are you saying that cars no longer exist in the future?”

“Not at all,” Benkelstein said.  “I was merely suggesting that you think outside the box for a change.”

“Darling, I was so far outside the box, I almost fell out of the car,” she told him.

“What did they do?” his wife asked.

“They undoubtedly measured time from some local historical event.  The year 52 since the end of the first Punic War, or The year 6 since Moscovicz got his tunic caught in the water wheel.”

“Uh huh.  So what, exactly, is your point about the calendar?”

“Which means you’re a very old, very senile man.  Did you forget to take your pill this morning?”

“Not so fast, dear," Benkelstein said.  "Maybe this road itself is the time warp, and is seen only by those traveling to the future--”

“And when we reach the end of the road--and our destination year--the road will vanish from sight.”

“It’ll vanish, all right, because you’ll pull off of the future 840 bypass, and onto Interstate 40, leaving your so-called time warp behind.  And I don’t mean a thousand years behind.”

“Oh my God!”  Benkelstein’s eyes grew wide.  “I just thought of something.  What if the entire population of the Earth is dying out sometime in our future?  What if the last few scientists still alive created this time warp as a means to bring a few people forward in time, beyond the year of the comet or the plague or whatever was threatening to kill everyone?  What if the road sign was there just to let us know we’ve come forward 840 years, so we won’t freak out when we see all the changes?”

“If my theory’s correct," Benkelstein continued, "it would mean that the current year is actually 2846.  It would mean that by pulling onto this road, we’ve randomly been given the responsibility to maintain the human species, so that--”

“It would also mean that we are among the few people now on the planet,” Mrs. Benkelstein said.  “Possibly the only ones.”  Apparently she had given up on reading, and had decided to humor Benkelstein.

“Until we pass another car, I’m afraid we must assume that to be the case,” Benkelstein conceded.

“Passing another car won't prove anything,” Mrs. Benkelstein said.  “If this is the future, the driver of the other car could be one of the aliens trying to destroy all human life.”

“Aliens?" Benkelstein said.  "Yes, of course.  That’s one possibility, an intergalactic fleet of war birds.  Scientists knew they were coming and built this time warp so a few of us could escape to the future before the aliens wiped out humanity.  And now ground forces are no doubt driving around, looking for any survivors.”

“What kind of car would an alien drive?” Mrs. Benkelstein asked him.

“Klingons would drive SUV’s,” he replied confidently.  “And the Ferengi would drive PT Cruisers.”

“Vulcans, with their logical minds, would probably drive one of those cute hybrids,” Mrs. Benkelstein said.

“Wrong,” Benkelstein told her.  “Sports cars are the one weakness of Vulcan men.  Not only would they drive Porsches, they’d be leaning out the window half the time, hooting and whistling at Vulcan babes.”

Mrs. Benkelstein laughed at the image.  “Do the Vulcan women have a weakness as well?” she asked.

“I see.”  She looked out the rear window.  “You know, it does seem odd that we’ve seen no other cars.”

“Yes,” Benkelstein agreed.  “Whether this is the future or the past or the time warp or even the present, you’d think someone else would find his way onto this road.  Perhaps we are the only remaining--”

“Aha!” Mrs. Benkelstein exclaimed, pointing ahead.  A bus was approaching on the other side of the median.  “What does that do to your theory?” she asked her husband.

“I can see that trying to get you to drop this routine is futile,” she said as the bus went past, moving at high speed.

“The Borg,” Benkelstein said.  “They’re going in the opposite direction.  If this road is a time warp, they’re heading for the past!  Possibly for 2006!  We’ve got to stop them!”  He swung the steering wheel to the left, veering onto the median.

“What are you doing?!!”  Mrs. Benkelstein shouted.  “Have you lost your mind?  Stop this instant!”  The car was bumping down a grassy embankment.  It reached the lowest point and started up the other side, tires spinning in the grass, Benkelstein ignoring his wife’s hysterical screaming.

Eventually Benkelstein eased the car onto the pavement and headed back toward highway 70.  The bus was no longer in sight.

“This has gone too far,” Mrs. Benkelstein said.  “Enough is enough.”

Benkelstein drove on, his eyes locked on the road ahead.

“What are you trying to do, catch up with that bus?” Mrs. Benkelstein said.  “That bus is long gone.  And even if you’ve gone so far off the deep end that you’ve convinced yourself the Borg really are in that bus, what are you planning to do if you catch up to them?  The Borg would absorb you so fast--”

“Assimilate,” Benkelstein corrected her.  It was the first word he’d spoken since he’d turned the car around.

“I know what’s happening here,” Mrs. Benkelstein said.  “You knew we were about to reach Interstate 40.  You knew we’d see the usual heavy traffic, knew we wouldn’t see some fantastic futuristic world of rocket cars, or some devastated lifeless shell of a planet . . . ”

Benkelstein kept his eyes on the road.

“You knew we’d find ourselves not in the year 3180, not in the year 2846, not in 840, but in good old 2006.  So to save face, you turned around, on the flimsiest of excuses, just so I could never have the satisfaction of saying, ‘I told you we weren’t driving down a time-warp to the future.’  Well, thanks to your childishness, instead of saving ten minutes, we’ve lost ten minutes.  Maybe twenty.”  She sank back in her seat.  “The Borg, riding in a bus,” she muttered.  “That’ll be the day.  The Borg have their pride, you know.”

Benkelstein refused to waver from his mission.  He pulled off at the Highway 70 exit and slowed as he approached the stop sign.  Suddenly Mrs. Benkelstein popped back upright.  “Quick, turn to the right,” she said.  “The Borg are above us; they’re trying to get us in a tractor beam!” 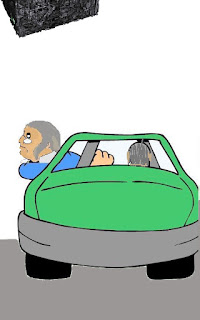 Benkelstein looked at her quizzically.

“Okay,” she said.  “You would have figured it out sooner or later.  I took your wife’s place three months ago.  I’ve been surgically altered to look like her.  I’m Captain Janeway.  Now Hurry, Benkelstein!”

Benkelstein was about to speak, but his passenger stopped him.  “Focus on the road!” she said.  “I’m counting on you.  We all are.”

Benkelstein turned onto highway 70 and floored the accelerator.  His eyes were shifting wildly, his face taut with stress.  Janeway? he thought.  How could--?

“Janeway” rolled down her window, stuck her head out and looked to the sky.  “They’re still back there!” she said.  Slow down; we can’t afford to call attention to ourselves.”

“Where are we going?” Benkelstein asked.  He could barely breathe.

“The Borg have set up headquarters at the Butner Psychiatric Hospital.  Do you know where that is?”

“Then get me there.  Your life depends on it.  All of our lives do.”

Benkelstein gripped the steering wheel and flew eastward down highway 70, his blood racing, and his heart fluttering.  And the slightest hint of a smile tugging at the corners of his mouth.

So, the driver is boredom, the highway is cherry garcia, and the borg is the wolf?

These literary stories always confuse me.

The driver is Evil Editor, the highway is the slush pile, and the Borg is literary agent Hannah Rogers. Got it?